Let’s face it: There’s a little bit of “Florida Man” in all of us. 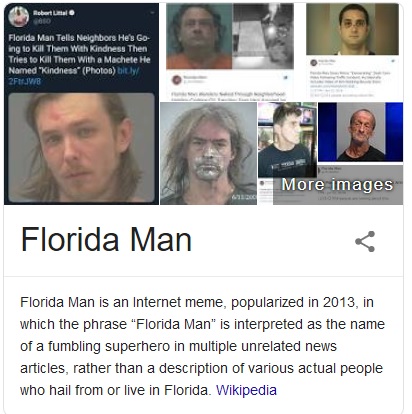 At least, that’s the idea behind the Florida Man Challenge, a viral social media joke that plays upon the plight of Florida residents who find themselves in strange predicaments – and sometimes in handcuffs.

The challenge started with a simple game: Google “Florida Man” and your birthday to find out what headline turns up.

The Florida Man meme dates to 2013, according to website Know Your Meme, focusing on news headlines featuring “bizarre domestic incidents involving a male subject residing in the state of Florida.”

January 5: Florida Man Puts Dragon Lizard in His Mouth, Smacks People with It

Jan. 29, 2019: Florida man thought he was stealing opioids but instead got laxatives, police say

What’s Up With The Hole In The Back Of My Plane?

Do Pilots Hook Up With Flight Attendants? | Loungtastic