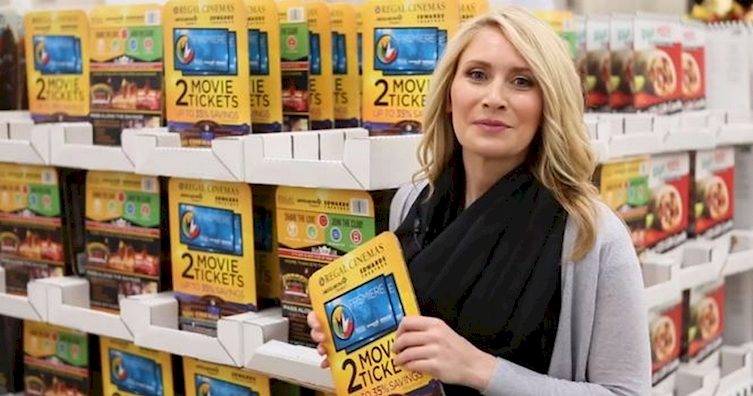 I distinctly remember the first time I went to Costco. Between the free samples and the full-sized candy bars that you could buy in bulk, my mind was blown and I became a Costco addict right then and there. Over the years, I've bought everything at Costco, from groceries to winter tires to sunglasses. It is a haven for penny pinchers like myself, but there is more going on in this warehouse than what meets the eye. People can get very passionate about scoring deals at Costco, which can turn this bulk store into a battlefield. Luckily, these helpful tips will not only help you score better deals at Costco, but they'll also get you out of the store in one piece with a relatively full wallet. Take a look at these hacks that will help you survive your Costco shopping experience.

Costco stores are big and it's pretty easy to get lost in one. There's nothing worse than wandering around aimlessly, searching for something on your list. Most of the stores follow a similar layout, which should save you time on your shopping trip.

— Food aisles and household goods are kept on opposite sides of the store, which should eliminate confusion right away. If you're looking for Nutella but only see lightbulbs, get to the other side of the store ASAP.

— The middle sections are where you will find snacks, candy, clothes, books and gift cards.

— The bakery and deli are typically located at the back of the store.

2. And know where the deals are

Items at the front of the store and on the ends of the aisles have been placed there to get more eyeballs, but they aren't necessarily on sale. You're more likely to score a deal if you go down the aisles. Check out #11 for another helpful hint to score sale items! 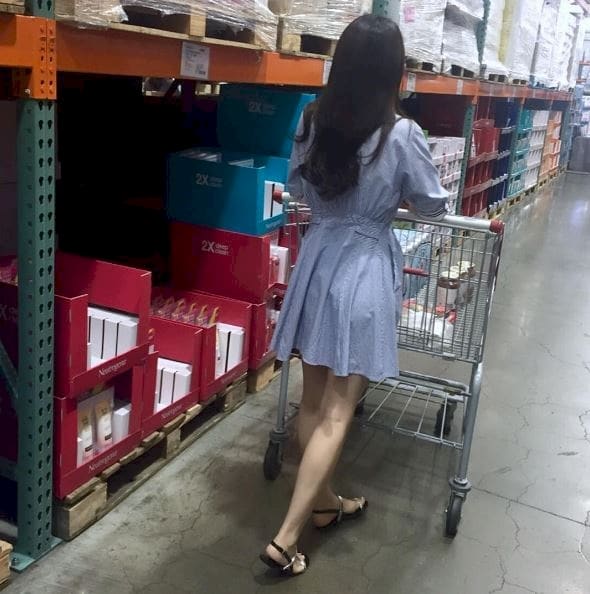 3. You can get in without a membership

If you aren't ready for the full Costco commitment, ask a friend to pick up a Costco gift card or cash card for you, instead. You don't need a membership to use one and can get access to the store without the contract and membership fees. 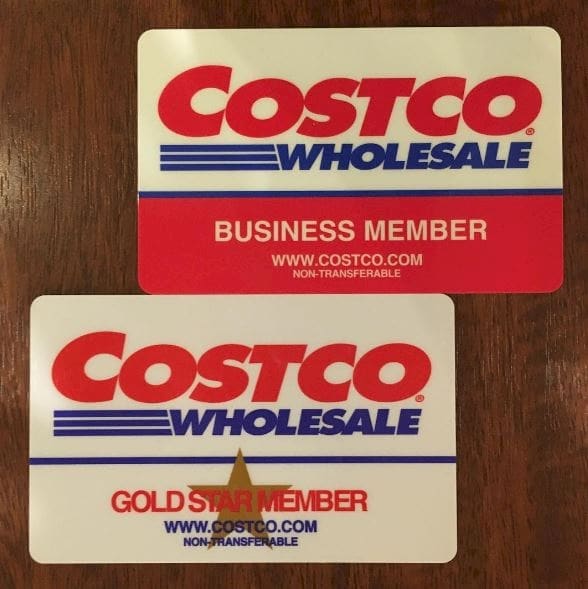 Have you ever been to Costco and seen a specialty display, only to be disappointed when it is gone the next week? Costco partners with a number of companies for a traveling product pop-up store, called a roadshow. Companies like Lindt and Krispy Kreme will travel to different Costcos across the country for a limited time. If you see a roadshow in your area, stock up before they are gone!

5. You can buy booze at Costco now

Yes, it's true! Costco recently began selling its own brands of wines and liquors. Pick up one of those Margaritaville mixers in the appliance aisle and you are set for an awesome summer party! 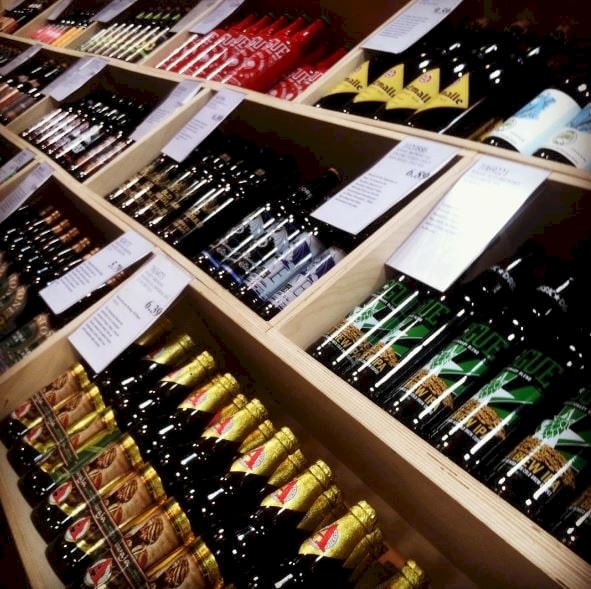 There is nothing more aggravating than Costco cart mayhem, which typically happens on the weekends and right before a holiday. The least busy time to shop is Tuesday and Wednesday mornings. There is nothing better than having an entire Costco aisle to yourself and eating all the free samples you want. 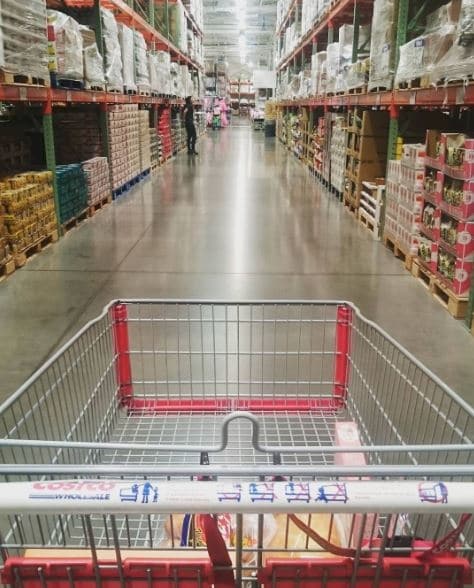 You can buy the very same Kirkland Signature hot dogs in the refrigerated section of the store to take home and eat! Yum! 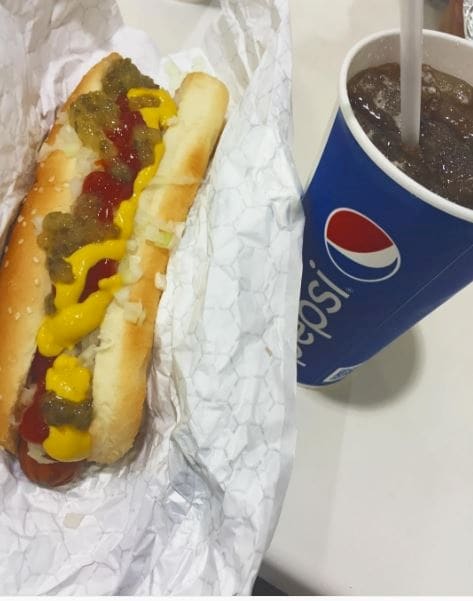 8. Here's a little secret about the free samples

Everyone loves the free samples at Costco, and who can resist having a little bit of cheesecake or pizza while you shop? While most people think there is a limit on the samples, you can actually take as many as you'd like (within reason). If there is a huge line of people waiting, be considerate and just take one, but if not, ask nicely if you can have an extra (or two). 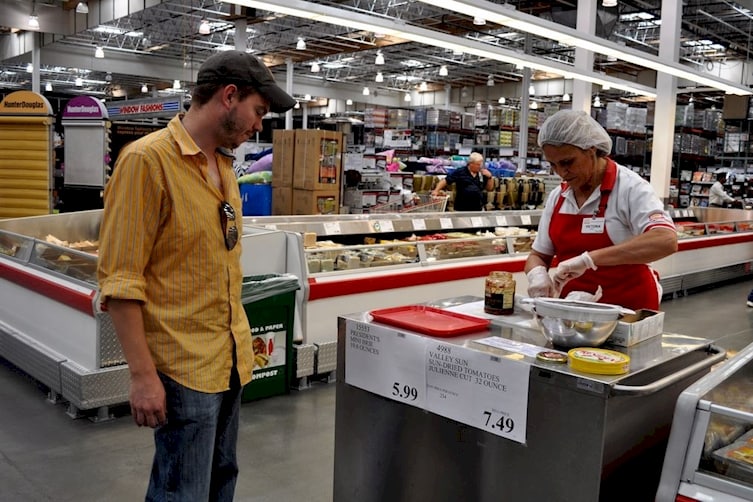 9. Get designer clothes and accessories at Costco

Kate Spade, Coach, Michael Kors, Pandora, and Ray Ban are just a few of the designer brands you can find at Costco, and the savings can be huge. A pair of classic Ray Ban Wayfarers is about $130 less at Costco. I'm definitely going to keep this in mind the next time I shop there. 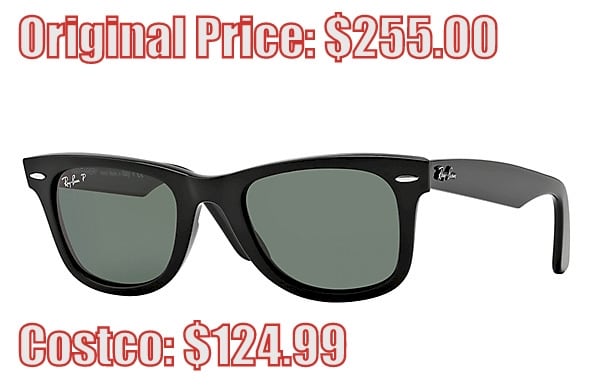 10. Dry goods and frozen foods are the best deals

Non-perishable foods are the best deal at Costco, simply because they give you more time to eat them before they expire. When I was in college, I used to do a big Costco shop at the beginning of each semester and stock up on soup, quinoa, cereal, and dry snacks, and then just shop for my fresh foods weekly at a market. This technique helped me save a lot of money during the school year. 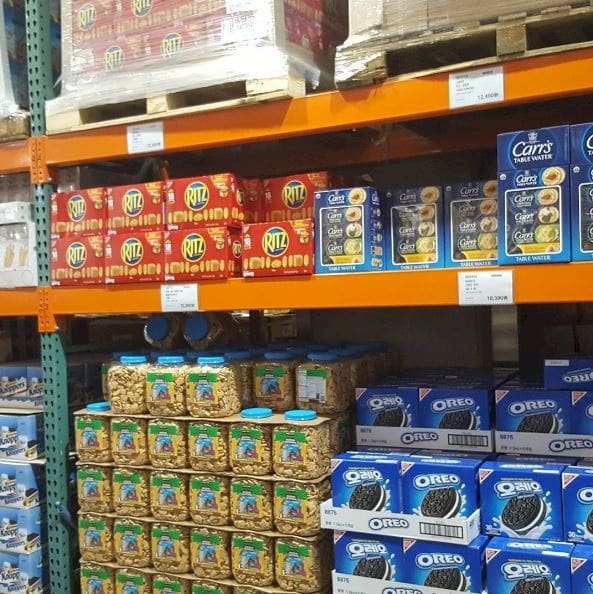 Most people don't know this, but there's actually a lot a Costco price tag can tell you about the product. For one thing, it's always a good idea to check the price per unit of any bulk items, as this will tell you how much the items are being priced individually. If it's more than what you would pay for one of those items in a regular store, it's probably not a great deal (unless you absolutely need six bottles of ketchup).

Another thing to look at is the price itself. Prices ending in .99 are regular price, and ones ending in .97 are on sale. Finally, if you notice an asterisk on the tag, that means the item will be leaving the store soon, so stock up!

Many people overlook the gift card section, but it's where some of the best deals are located. The 2-for-1 movie passes are a personal fave of mine and have saved me a ton of money. There's also things like discounted admission to local attractions and restaurant deals in this section, so don't skip it! 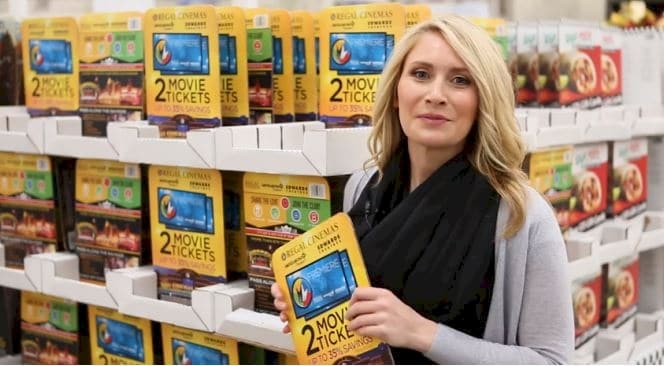 May you continue to give us brand-name deals at discount prices and more free samples than we can eat. 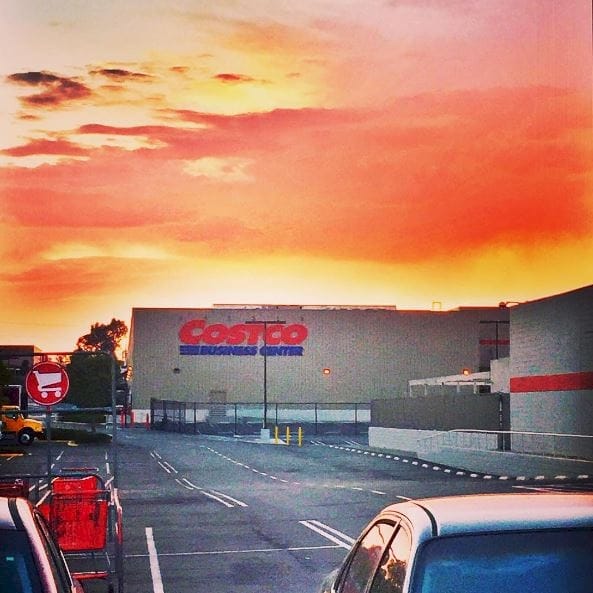 Guy Tried A Simple Experiment And Ended Up Saving Thousands Without Even Realizing It!

Many of us have our own tips and tricks to saving a little extra cash. From saving your change to sending a few dollars each paycheck to a separate bank account. These little tips and tricks can allow your saved money to add up over weeks, months and even years and when you cash in…it can be a pleasant surprise! 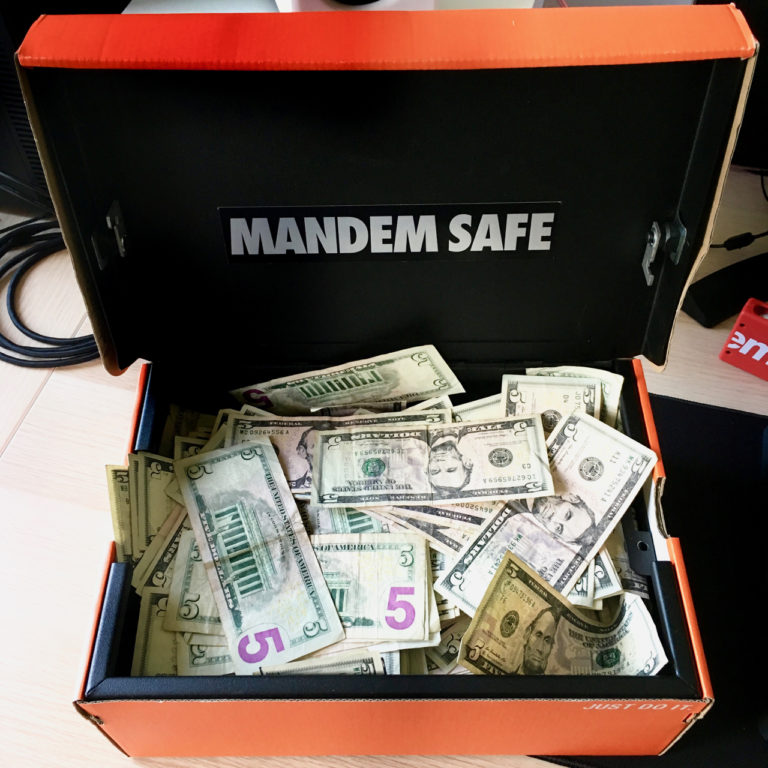 “Last month I cashed in on an experiment I started 5 years ago. I read about this idea to save a $5 dollar bill every time you had one on yourself. So I decided to give it a shot and start in August 2012. I never created change with a fiver on purpose nor went out of my way to exchange bills. I just set aside a bill when I came home from work or a night out, slowly adding to the pile and never withdrew.”

Considering I seldom use cash I was curious to see how much would be saved over this period of time. It ended being a bit more than I expected with the final amount of $2285. Not too shabby, might have to start this again sometime […] It’s a neat little experiment to save money you don’t miss.”

You can apply this same method with any bill denomination of course! Give it a try! Who doesn’t want to cash in a few thousand! Just think of the fun vacation you could take with all that money!

Another great saving plan that works wonders is one we wrote about a while back. A family of seven saved a whopping $944.21 in one year by saving all the change they received back when purchasing items with cash. 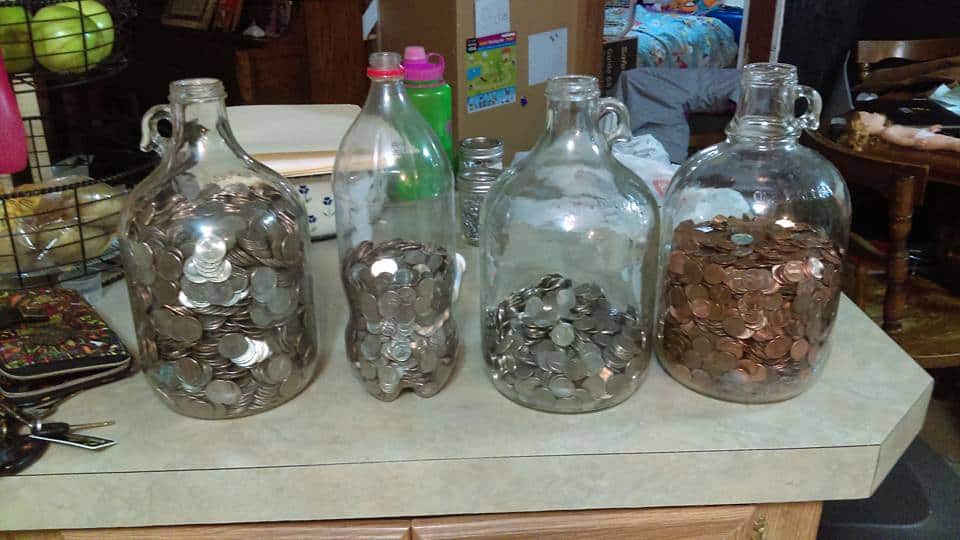