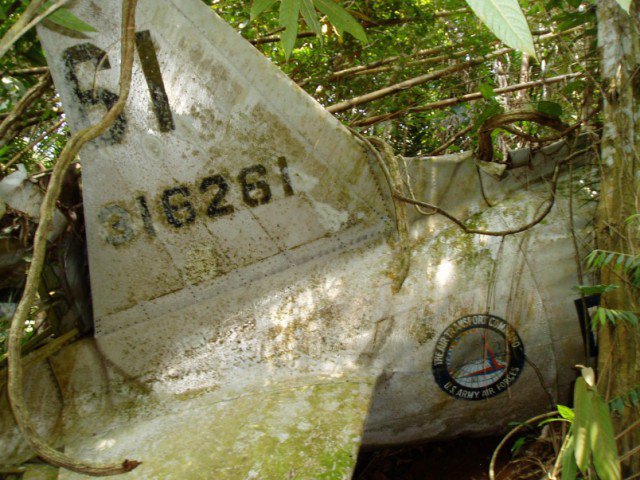 Just months after the end of the Second World War, three United States airmen took off from Singapore in their military transport plane, bound for a small aerodrome in Penang. They disappeared for no apparent reason and, until recently, without a trace.

The date was 27th November  1945. The weather was favourable for flying, with good visibility and only a little light rain forecast for the day. The long flight was to take them from the southern tip of the Malay Peninsula, over the dense jungles of the hinterland and down to the Straits Settlements island of Penang at the northwest extreme of modern-day Malaysia. It was meant to be routine transport trip.

The C-47 aircraft, however, vanished en route. The three men on board, Judson Baskett, a Flight Officer, William Myers, a First Lieutenant, and Donald Jones, a First Class Private, were never seen alive again. A wide-ranging search mission was organised, but it discovered no hint of the fate of the plane and its crew. After a while, the three men were declared be dead, even though there was no evidence to this effect.

The charity PacificWrecks.com, which investigates shipwrecks in and near the Pacific Ocean dating from the Second World War and the Korean War, noted that twenty years later someone had reported seeing the wreckage of a plane on a jungle-covered mountainside in the Malay Peninsula. This 1966 report appears not to have been followed up.

Then in 1985 two people clambering through the jungle stumbled upon wreckage. The location was recorded, but again the matter was not taken any further. Only in 2009 did officials start taking action after some local residents took photographs of the wrecked aircraft. The officials then contacted the USA embassy in the capital, Kuala Lumpur.

The Malaysian and US authorities began putting plans in place to examine the site and recover what they could of the wreckage. However, several domestic and international incidents and distractions caused long delays to the planned recovery mission, and it took until 2015 before any concrete action could be taken.

In August this year the recovery of the airmen’s remains finally commenced. First, the remains were respectfully carried from the wreckage and taken to the Kuala Lumpur. There, in a quiet ceremony, they were handed over by a contingent of Malaysian soldiers to four US servicemen. The two soldiers and two airmen carried the flag-bedecked casket across the tarmac and into the plane, an enormous C-130 transport. The US defence minister, Secretary Ash Carter, who happened to be in the region on business, paid his respects quietly on the sidelines, the JP Updates reports.

The plane then took off, heading eastward for a stop-over in Hawaii. Although it is being assumed that the remains are indeed the missing men, this won’t be established beyond doubt until forensic scientists in the US perform identification tests. At last, after 70 years of mystery some sort of finality will soon be reached for the memories of those three men.

Although the USA suffered heavy casualties in the Pacific region during the Second World War, they weren’t active in Malaya, which was then a colony of the British crown. The Japanese invaded the entire peninsula during the war, pushing the British garrisons out of Penang and southward until they were finally forced to leave Singapore. With the defeat of Japan, the British afterwards re-established their presence in Malaya, until their departure several years later and the founding of the independent state of Malaysia.

Prev post Pilots arrested on suspicion of being too drunk to fly
Next post When Can We Start Traveling Again? On Second Thought...