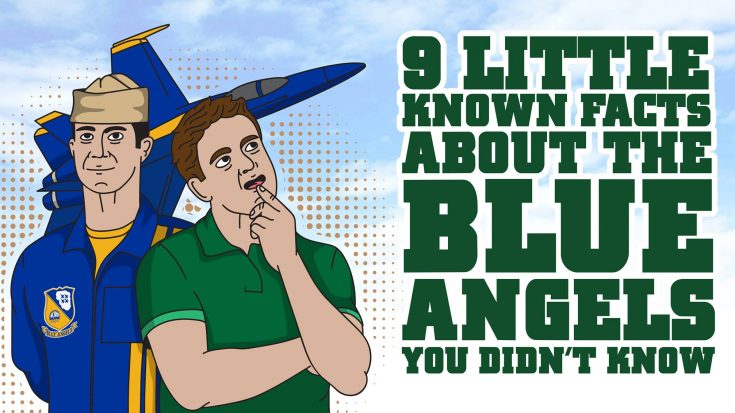 #9. They Got Their Name From A Bar 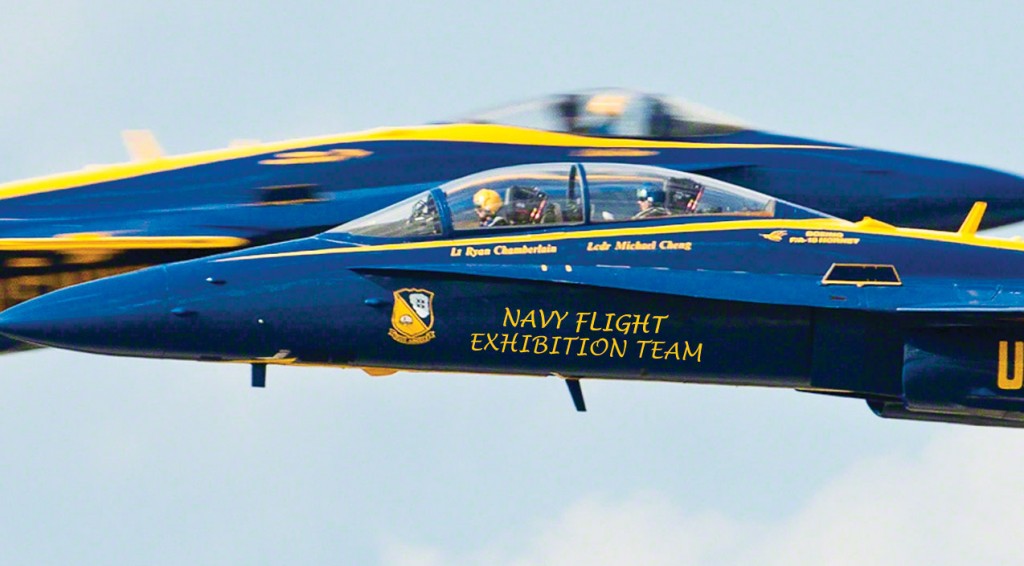 Here’s a fun one. The Blue Angels were initially supposed to be called the Navy Flight Exhibition Team. Doesn’t have that ring to it, right?

Luckily, one of the original pilots read about the Blue Angel Nightclub in New York City and the name stuck.

They first introduced themselves as the Blue Angels on July 21st, 1946 before starting their routine. We’re definitely glad. It’s a mouthful to say, “hey, I really can’t wait to see the Navy Flight Exhibition Team when it comes to town. Man, they’re so good.” 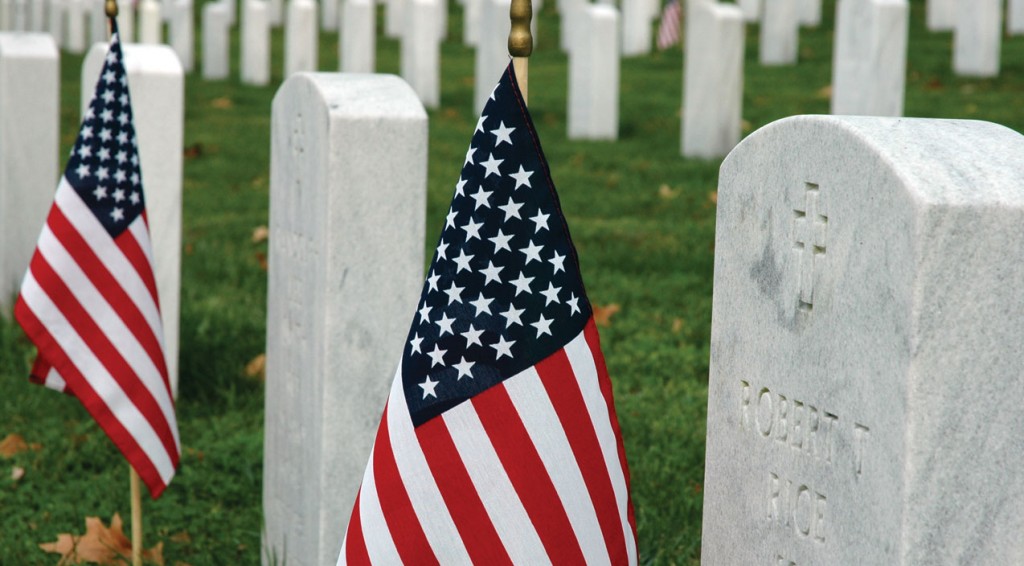 Any other profession would be banned if its casualty rate was as high as the Blue Angels. Since 1946, there were a total of 262 Blue Angel pilots. Out of all of them, 27 have died during shows and practice sessions. The math is not that hard. That’s just a bit over 10%.

The most recent crash happened on June 2nd, 2016. Captain Jeff Kuss’ Hornet crashed while taking off. He stayed in the plane to avoid civilian casualties. Despite this daunting statistic, these guys are begging to be let in. They view it as one of the highest honors they can attain and that’s what makes these guys so solid.” 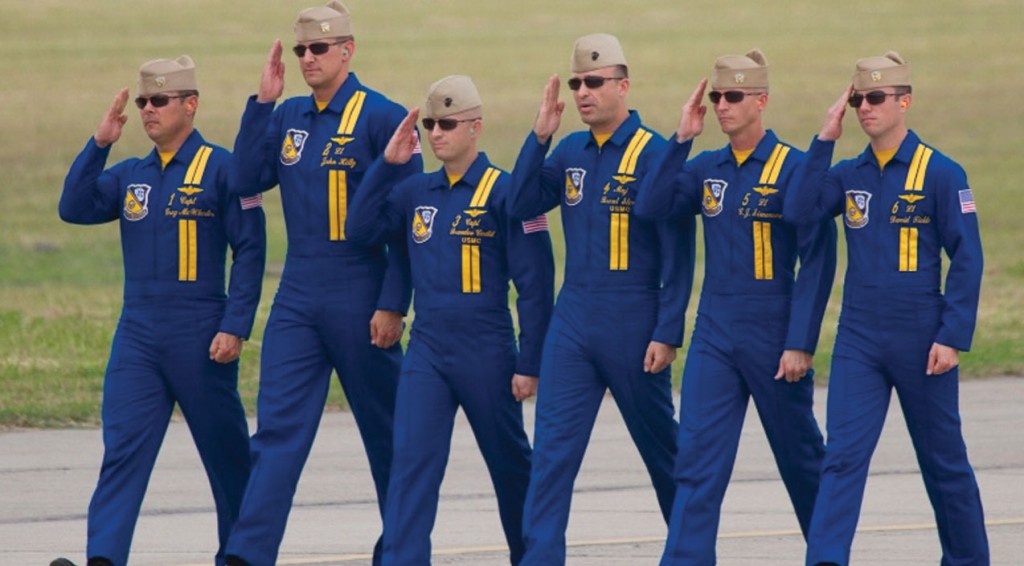 In order to get that good, you have to practice. That makes sense. But looking at their airshow schedule, you’d wonder when they even find the time to do so.

Their regular season runs from March to November. They perform about 70 shows during the year, 34 of them in different locations around the United States. Their practices then, take place during the winter.

In addition, they train during their regular season as well. They do so on Tuesdays and Wednesdays. Also, they do a “practice show” every Friday when they arrive at their new show location…

Ok, we know all know the Blue Angels fly really close together. At times, it looks like they’re actually on top of each other, but sometimes that’s an optical illusion which they do on purpose to make it look more exciting. It’s all about vantage points and such.

That’s not all however. To pull off those “illusions”, they need to be painfully close to each other anyway. Like, 18 inches apart at times. The above video is a great example of that. The two wingtips are about a foot and a half away from each other, but also a foot and a half or so above the cockpit the video was taken from. Talk about precision.

5. No G-Suits For These Guys 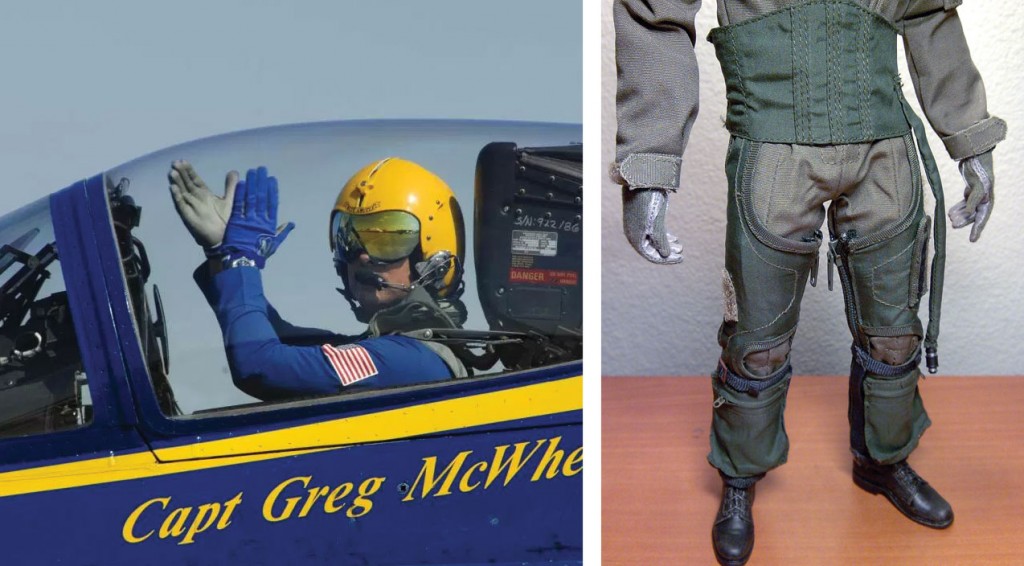 This one’s pretty common knowledge, but after posting a couple of videos featuring the Blue Angels, we saw a common comment appearing. People fighting over who is better, the Blue Angels or the Thunderbirds.

Not that it matters to us as both teams are great and are an integral part of our air superiority, we did notice that most air force guys were saying the Blues wear G-strings (G-Suits put in a not so flattering way.) We had to step in a couple of times and correct that misconception.

Although they routinely pull 7.5 Gs and sometimes more, they cannot wear G-suits due to the nature of their job. Since the Hornet’s stick is between the pilot’s legs and they fly so close to each other, a constantly inflating and deflating suit would interfere with their delicate stick movements. Instead, they use muscle contractions to remain conscious.

As an extra fact, their control sticks have a spring tensioned with 40 pounds to further restrict any unwanted movement… 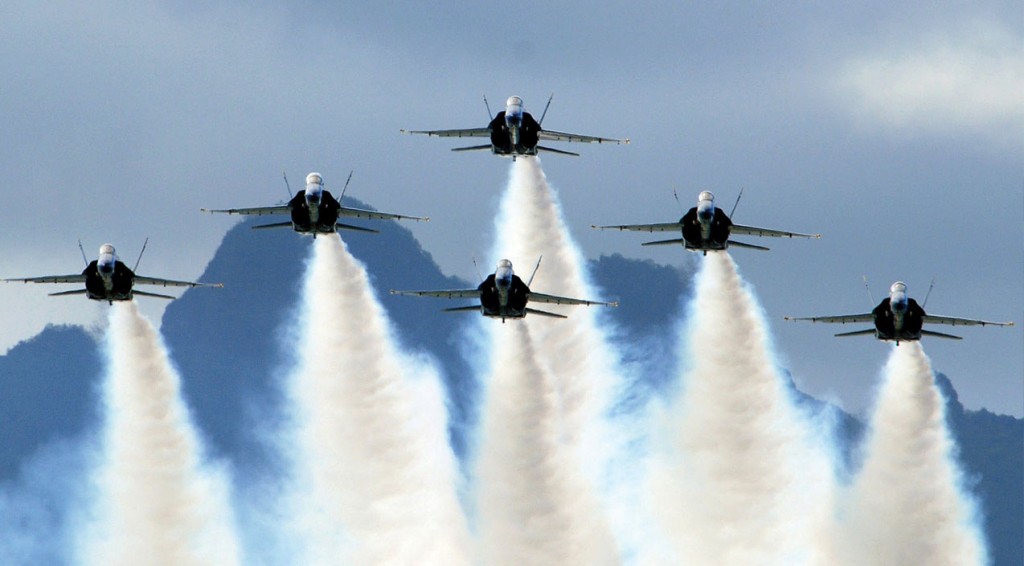 This one none of you might even have thought of. The Blue Angles are a part of the Navy and they are after fighter pilots. The current squadron operates 10 McDonnell Douglass F/A-18C Hornets and 2 McDonnell Douglas F/A-18D Hornets. Four of the aircraft are spares. For transport, they have a C-130T Hercules.

Since these birds are part of the USN’s inventory, they can be reverted back to combat readiness in under 72 hours if need be. Then, they’re operational.

The maintainers would have to reinstall the gatling gun which has been replaced with a canister which produces the smoke you see at airshows and make some minor cockpit adjustments such as removing the control’s tension spring and so on. After that, they’re ready to crack some heads.

Check out the next one… 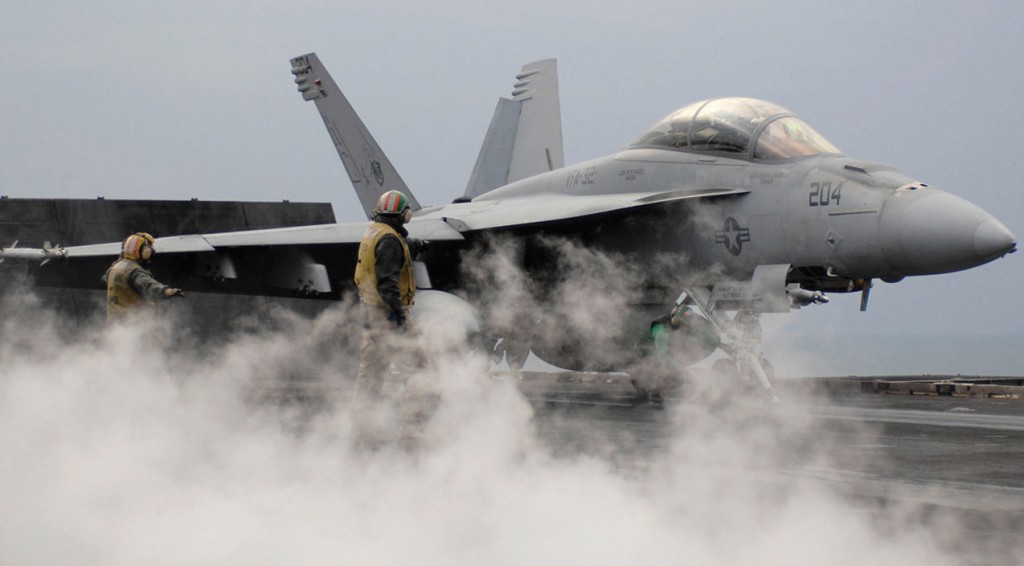 The Blue Angels might be a demonstration team, but they are naval aviators first. That means that they have been, and are, fighter pilots. Over the years, two former Blue Angels were killed in action.

On March 8th, 1951, LCDR Johnny Magda was shot down and killed in Korea. On January 27th, 1973, CDR Harley Hall was shot down over Vietnam. His body was never recovered and he was listed as MIA 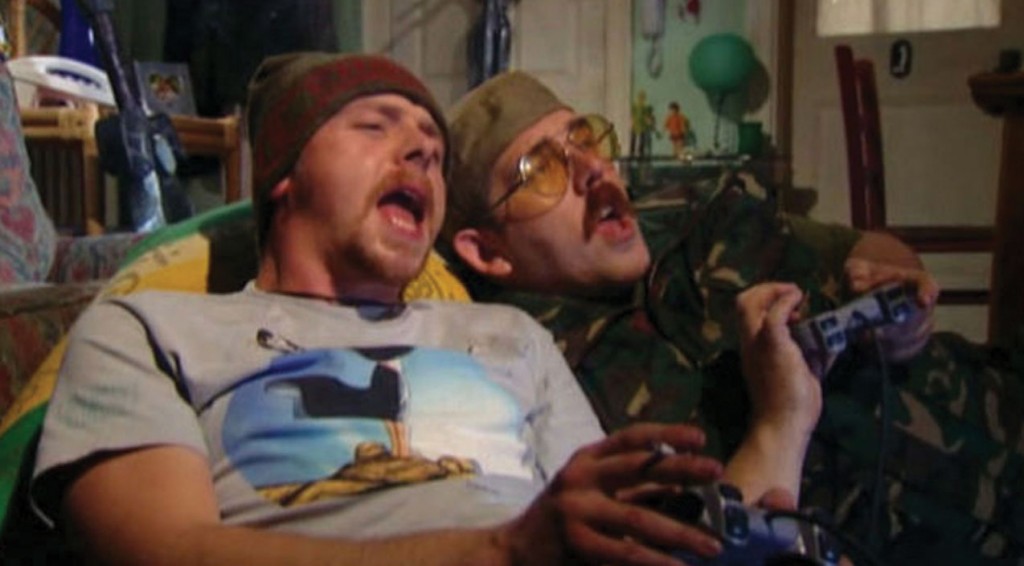 This ones a bit weird but we figured we could make a pretty interesting comparison. The average age of a Blue Angel is 33. By this age, you’ve done so much work and training that you’ve become one of the most elite aviators in the world.

Interestingly enough, the average age of a video gamer is not 12 or 15 like you’d think. According to the last study performed in 2014, the average gamer is a 31 year old male. Not making a judgement…just…sayin’ 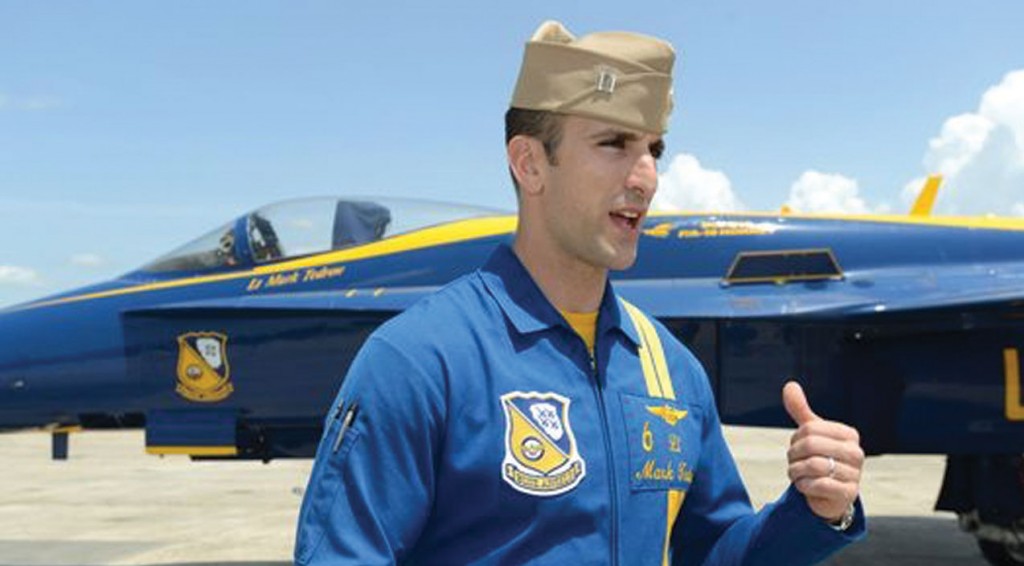 As you may imagine, becoming a Blue Angel is a grueling process. One does not simply get a pilot’s license, do some flying and fill out an application. In order to be even considered, you need to go through the training to became a Navy or Marine pilot, which is already an accomplishment (no offense chair force.)

The applicants need to have a minimum of 1,250 tactical jet hours and be carrier-qualified. The current team members average about 250 carrier arrested landings. After that, it’s application time.

To be considered, they need to “rush” the Blue Angels during an air show or other event and submit the application. They are then asked to “tell a joke prior to the brief and are graded by the team as part of the…process.” Not sure when the tradition started, but that’s something you’d never expect from a team that is viewed as one of the most disciplined groups in the world.