F-35 Sets Itself On Fire Again

Another day, another problem with the F-35. Recently a group of F-35s was grounded due to a faulty coolant tube and now a new issue has emerged. Recently at Mountain Home Air Force Base in Idaho during a routine exercise an F-35A caught fire on the tarmac. The fire began towards the aft of the jet and spread before being extinguished. The pilot was evacuated without sustaining any injury and is in good health.

“The fire was extinguished quickly. As a precautionary measure, four 61st Aircraft Maintenance Unit Airmen, three Airmen from the 366th Maintenance Group and the 61st Fighter Squadron pilot were transported to the base medical center for standard evaluation.”

An investigation into the matter revealed that the cause may have been a strong tailwind blowing as the engine ignited. So now we see $100 million go up in flames but thankfully no one was hurt in the process. The F-35 program will advance ahead despite the many mishaps with the fifth-generation fighter. This clip from The Fiscal Times shows a look into the many problems the F-35 has encountered during development.

Lockheed Martin is confident the F-35 stealth fighter’s operating cost will be cut to $25,000 per hour by 2025 if the Joint Program Office that manages the aircraft agrees to a performance-based logistics contract.

The company is under pressure to deliver improvements to the aircraft’s reliability and operating costs as the jet’s leading customer, the US Air Force, considers cheaper alternatives, such as the Lockheed F-16 fighter or a clean-sheet 4.5th-generation combat aircraft.


Greg Ulmer, the company’s executive vice-president of aeronautics, said on 19 February that the company is anticipating a request for proposal for a performance-based logistics contract from the Joint Program Office this coming spring. Lockheed believes it will receive a sole source justification as the only company qualified to maintain the F-35.

One Of The Few Aerial Refueling Clips Of An F-35–Lookin’ Good! 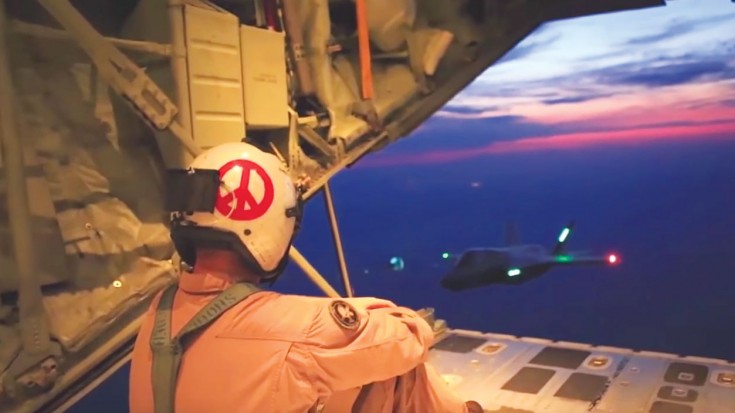 That is… Just Amazing!

We’re always really excited when we get to see real live action videos of our armed forces. It’s so rare for civilians to get a peek into the day to day activities of our servicemen and although they’re not always that exciting, it’s still really neat to see.

This video is a prime example. Watching something so seemingly mundane as refueling a plane can be actually really interesting. Just picture yourself in one of these positions. Imagine doing these tasks. You’d be flying through the air, blessed with gorgeous views all the while helping our military be the well oiled machine that it is. We might have become a bit mushy on this one, but it’s true, right?

As for this video, here’s what we know about this particular mission. It was filmed by LCpl Jessica Lucio while flying over Yuma, Arizona. It took place on a USMC KC130J tanker with the crews practicing midair refueling of our new flying wonder (or flop depending on who you talk to), the F-35 Lightning II.

The fighter pilot is flying the F-35B, which is a variant capable of STOVL or short take-off and vertical landing. Some of these birds are already operational, although a few kinks still need to be worked out.

Lockheed says it is developing a performance work statement and draft contract structure in coordination with the Joint Program Office.

The Joint Program Office and the Department of Defense have previously expressed scepticism that Lockheed could reduce the F-35’s cost to $25,000 per hour by 2025 – the company’s goal. However, the company points to its track record in reducing the operating costs of the jet in recent years.

“Over the last five years, we’ve reduced the operating costs by 40%,” says Ken Merchant, Lockheed’s F-35 sustainment vice-president. “We’re predicting that we can take another 40% out of that Lockheed-controlled cost, which is about 39% of the cost per flying hour.”

In theory, a multi-year performance-based logistics contract would allow Lockheed to take ownership and control of the whole maintenance and sustainment process of the F-35.


That is, opposed to a more conventional maintenance contract which tends to cause customers to order parts and services in disconnected, one-off transactions.

A multi-year performance-based logistics commitment could allow the manufacturer to take advantage of economies of scale savings by purchasing bulk parts and services upfront at lower prices from suppliers. It might also create cheaper and more effective sustainment processes. Some savings would be passed on to military operators of the F-35, while Lockheed would keep the rest as profit.

Lockheed emphasises that the performance-based logistics contract is more than a theory. The company is preparing to execute on such a maintenance arrangement and has implemented similar contracts with its suppliers.

“We believe we’re making the right movements; that we’ve made the right upfront investments in decision support tools and decision analytics, that are helping us make the right calls and move parts to the right places. And, it’s driving those cost savings,” says Merchant. “We also need the government to make similar commitments and savings on their side of the equation as they’ve got 49% of the cost per flying hour on the jet. Many of the things we’re doing will impact those positively on their side of the equation. And so that’s what gives us the confidence that we can get to that [$25,000] by ’25.”

Pratt & Whitney, maker of the F-35’s F135 jet turbine, is responsible for the remainder of the combat aircraft’s operating costs.

Lockheed says the current operating cost of the F-35 is about $36,000 per flight hour. The company believes it can reduce its share of that cost by another 40% by 2025.