March 19, 2020November 28, 2021 30
Many people wish for the glamorous lifestyle and income of a pilot. But, do pilots always wear crisp uniforms and make the big bucks? Not necessarily, according to Al Lee, director of quantitative analysis at online salary database PayScale.com. He says, “There’s a huge variation in pay depending on whether you’re flying a float plane for a regional commuter company or flying 747s for United. Regional airlines sometimes pay $20 per hour and only when the engine is on.” Lee says that with only 1000 hours of engine time a year, that hourly rate can come close to minimum wage.

Fortunately, you don’t have to wait to fly jumbo jets if want to work in aviation. In fact, if you like doing math, mechanical work or security tasks, here are some in-demand job options, that are also some of the best-paid in the industry, according to PayScale.

The loadmaster mathematically preplans the correct placement of passengers and cargo on the airplane so that the plane can take off and land safely. In the military, loadmasters often fly with the plane so that they can prepare it for its next leg of the journey. Commercial airlines often hire a similar position, called a load planner, which does not require flying on the plane. When asked about how secure this job position is for the long haul, former US Air Force load master Ben Nesheim says, “There will always be a load master to calculate weight and balance. For every plane that carries cargo, somebody has to do the math.”

An avionics technician works on the components used for aircraft navigation and radio communications, weather radar systems, and other instruments and computers. They often must solve complex electrical problems and can work odd hours depending when their expertise is called upon.

Many mechanics specialize in preventative airplane maintenance, though they also do repairs. While some mechanics learn their skills on the job, most attend an FAA-approved school, of which there are 170 in the US. Jobs with major airlines are the most competitive because they offer the best pay and benefits.

Airplane mechanics with some experience in the field and a positive track record can move into the role of inspector. Airplane inspectors enjoy greater job security because the work they do is, and likely always will be, required by the FAA. Airlines must have them around to regularly inspect the planes after any maintenance, repairs or overhauls. According to the BLS, the best job opportunities are available to mechanics who have an aircraft inspector’s authorization.

Air marshals are employed by the federal government to guard against attacks targeting U.S. aircraft, passengers and crew. According to the Transportation Security Administration’s website, air marshals may have the unique challenge of working independently, without back up. Therefore, they are trained in handgun accuracy, terrorist behavior recognition and learn “aircraft specific tactics and close quarters self-defense measures.” Sky marshal sounds like a good job for someone who is brave, tough and level-headed.

Lee notes that air traffic controller is one of the best-paying jobs you can have with an associate’s degree. It’s well known for causing sky-high stress levels and requiring a tremendous amount of mental focus. But, did you know that, depending on the airport, the work is separated out between controllers for ground movement, take-off, en route flight time, landing and more? The competition for these lucrative, steady job positions is steep, though the BLS expects a wave of retirement in the coming years that should open up more positions to younger controllers.

Other interesting aviation salaries to compare… 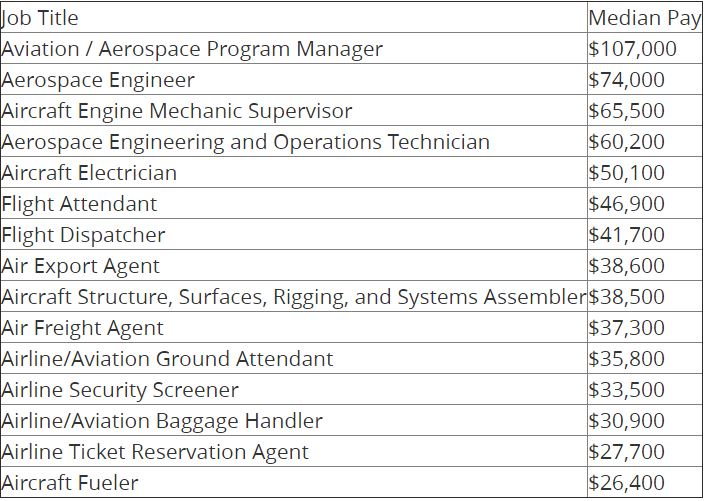 Once again, this is a job position that requires both technical skill and a knack for leading teams. A maintenance manager is a knowledgeable professional who ensures that their teams perform maintenance regularly and according to regulatory guidelines. The manager schedules a staff of technicians and likely does much of the hiring and training of their team.

An aerospace project engineer must not only understand the ins and outs of aerospace engineering, but they must have the personal and organizational skills to lead a team through a project. A project engineer is likely involved in managing the budget for a project, hiring and training staff, checking their team’s work and other administrative tasks.

Most pilots used to receive their training in the military, but in recent years a college degree and training from an FAA-certified flight training school has become more common among new hires. And, while many may pay less, there are plenty of jobs for pilots besides passenger airline gigs. According to the Bureau of Labor Statistics (BLS), about 34 percent of commercial pilots use their time in the air to dust crops, test planes, monitor traffic, fight fires and perform other non-typical functions.

According to Lee, “Aerospace is second only to petroleum engineering in pay.” That’s why the director of an aerospace engineering program management team can earn well into the six figures. This person likely has a graduate degree in business, such as an MBA, in addition to their degree in engineering. Directors are involved in developing the company’s business strategy, negotiating contracts to build aircraft and taking responsibility for company profitability.