OFFUTT AIR FORCE BASE, Neb. — Fortunately, it has never come to this. But if the United States ever found itself in the middle of a nuclear war, it would need the ability to get a command and control center off the ground and away from potential attack targets in just minutes.

That’s precisely what the National Airborne Operations Center (NAOC) is all about. A set of four E-4Bs — which are Boeing 747-200s modified to support the military’s doomsday communications needs — these planes were designed to allow the country’s most senior military officials to stay in charge and control during a nuclear crisis, or something approaching that level of seriousness.

The planes are based out of this Air Force Base, which is also home to U.S. Strategic Command, and was the longtime home of U.S. Strategic Air Command, just south of Omaha. CNET reporter Daniel Terdiman got a rare opportunity to look inside and out of one of the Doomsday planes as part of Road Trip 2013 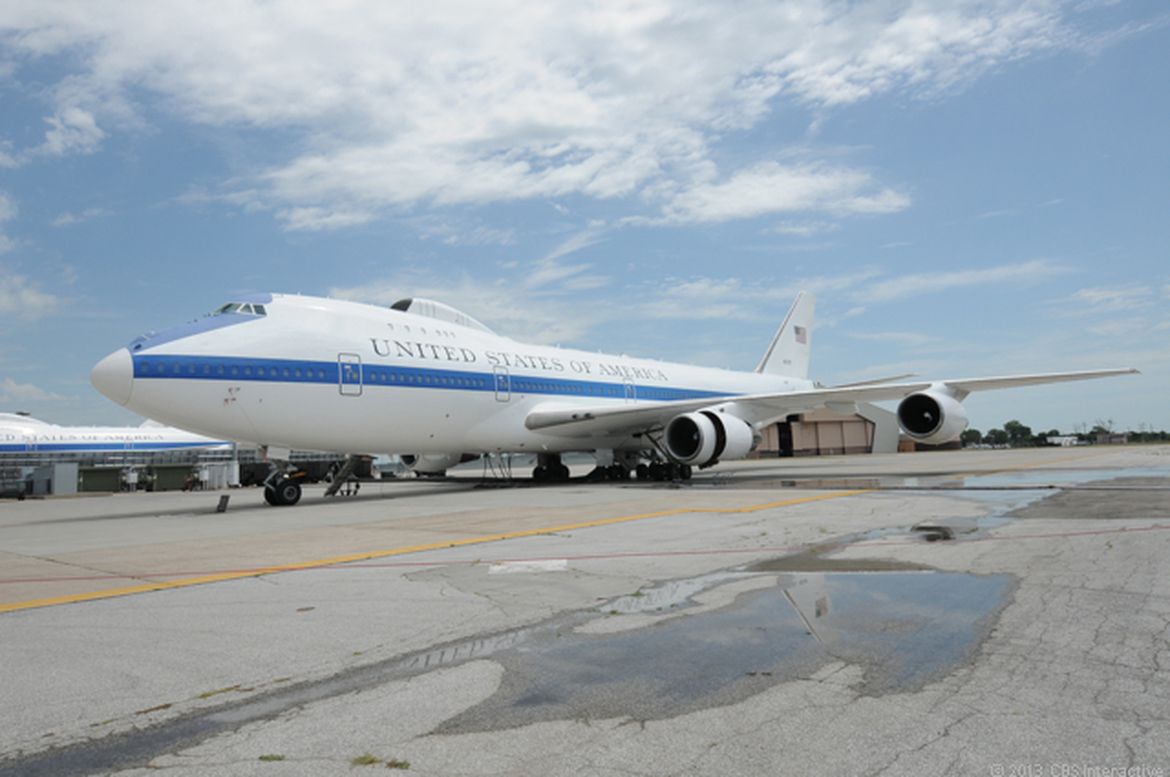 Three out of four

Though there are four NAOC planes in the military’s fleet, all four are almost never operational at one time. Usually, at least one of the planes is being worked on. But even having three together at once, as seen here, is a somewhat rare event.

The E-4B in the foreground is the one that, when this photograph was taken, is known as the “alert” plane. That means its crew is on a week-long alert and ready to go airborne within minutes, should such a situation arise. Which plane is on alert depends on many factors, among the most important of which is the maintenance schedule.

The planes are also sometimes used to flying the U.S. secretary of defense on international trips. 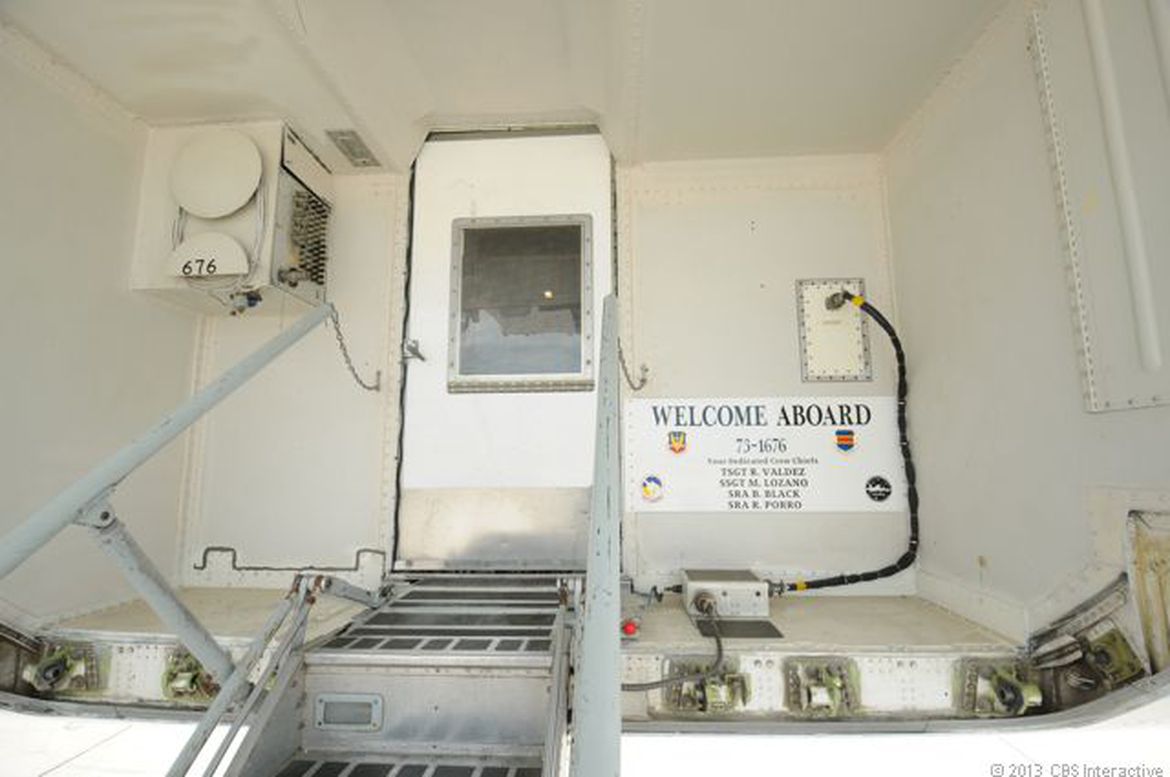 Anyone going aboard one of the Doomsday planes is greeted with a sign belying the plane’s sombre raison d’etre.

The NOAC planes are similar to the president’s Air Force One but actually have a more sophisticated communications package, including a few more antennae. This chart shows the full range of communications that are possible on board the plane. Essentially, it is outfitted to communicate across the entire range of electromagnetic capabilities in order to ensure that the command and control leadership are able to talk to their forces, regardless of the situation. 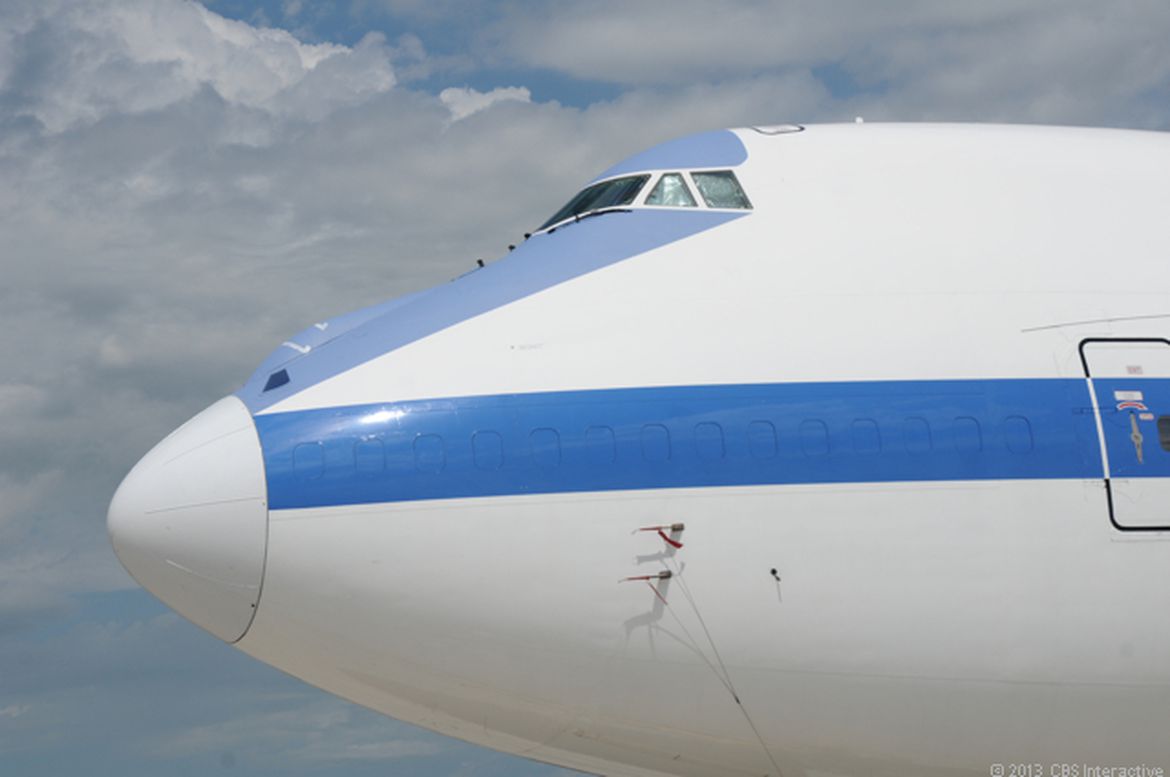 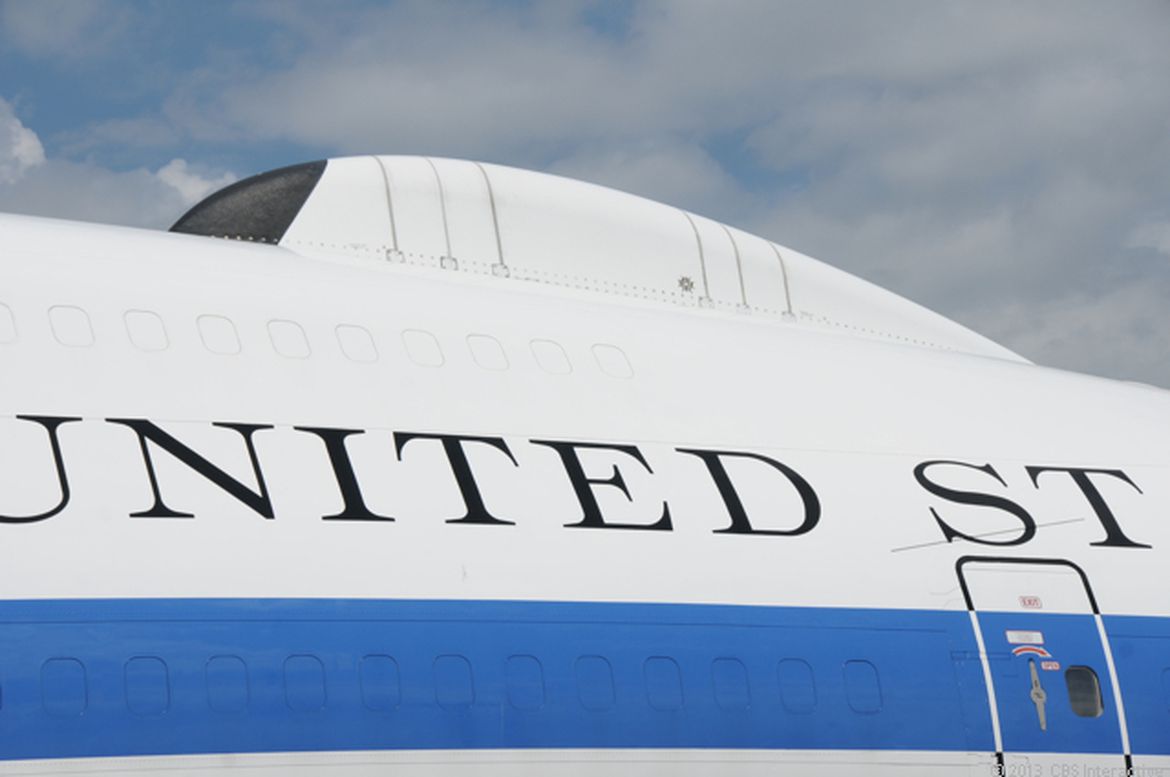 This hump, on top of the plane’s fuselage, gives those on board the ability to communicate via super high frequency and Milstar systems. According to the Air Force, Milstar “is a joint service satellite communications system that provides secure, jam resistant, worldwide communications to meet essential wartime requirements for high priority military users. The multi-satellite constellation links command authorities with a wide variety of resources, including ships, submarines, aircraft and ground stations.” 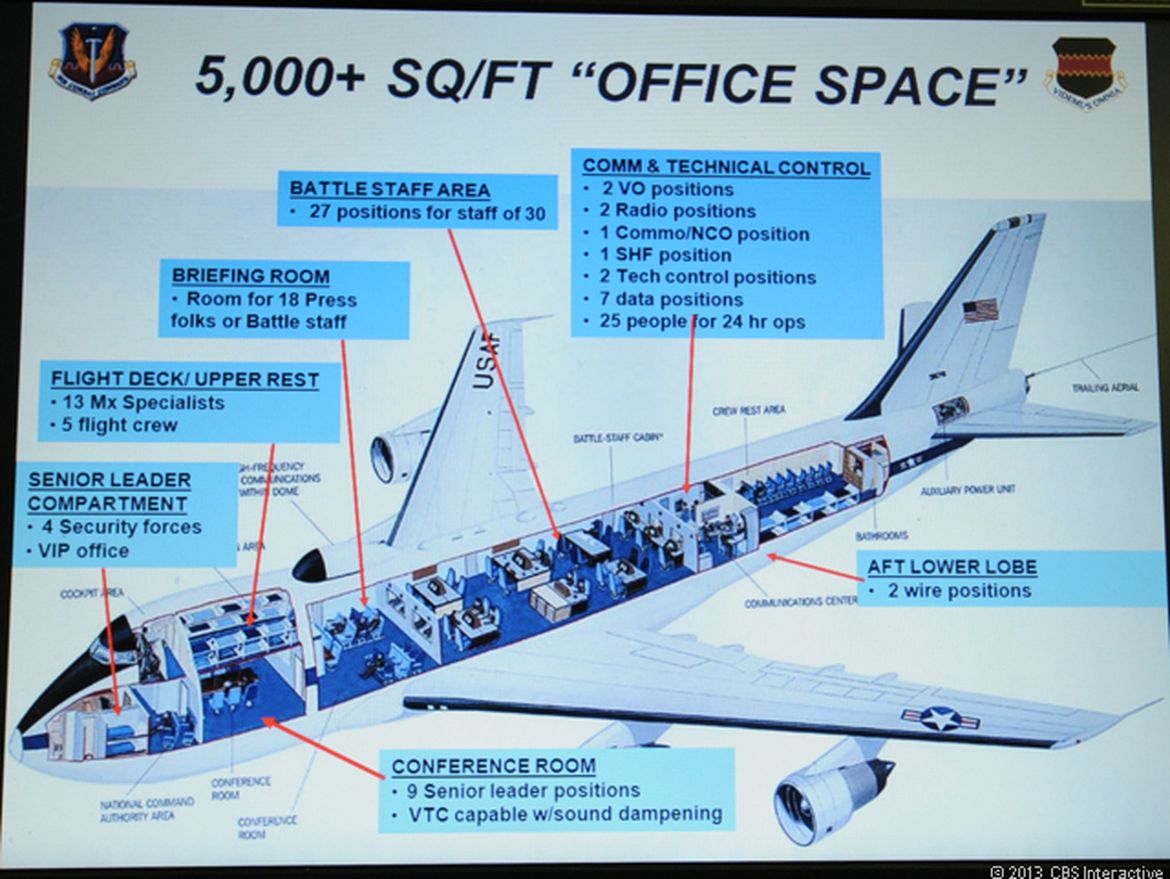 This chart shows the various sections and compartments aboard the Doomsday planes. 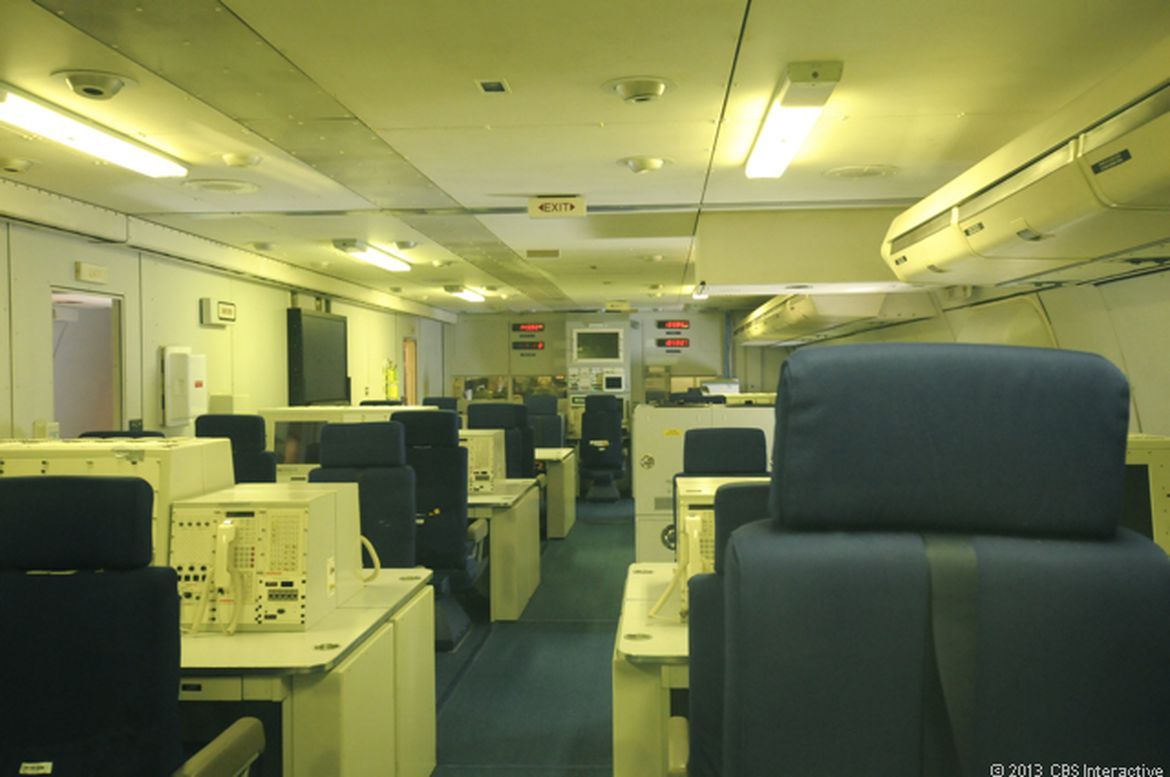 This is the plane’s battle staff room — seen through a window, as CNET was not allowed to takes photographs while inside the room. When the plane is on alert, the room would be full with officers from each of the United States’ military services. The goal is to staff the room with officers who understand the country’s big-picture strategic situation, as well as national, state, and local infrastructure, including power grids. 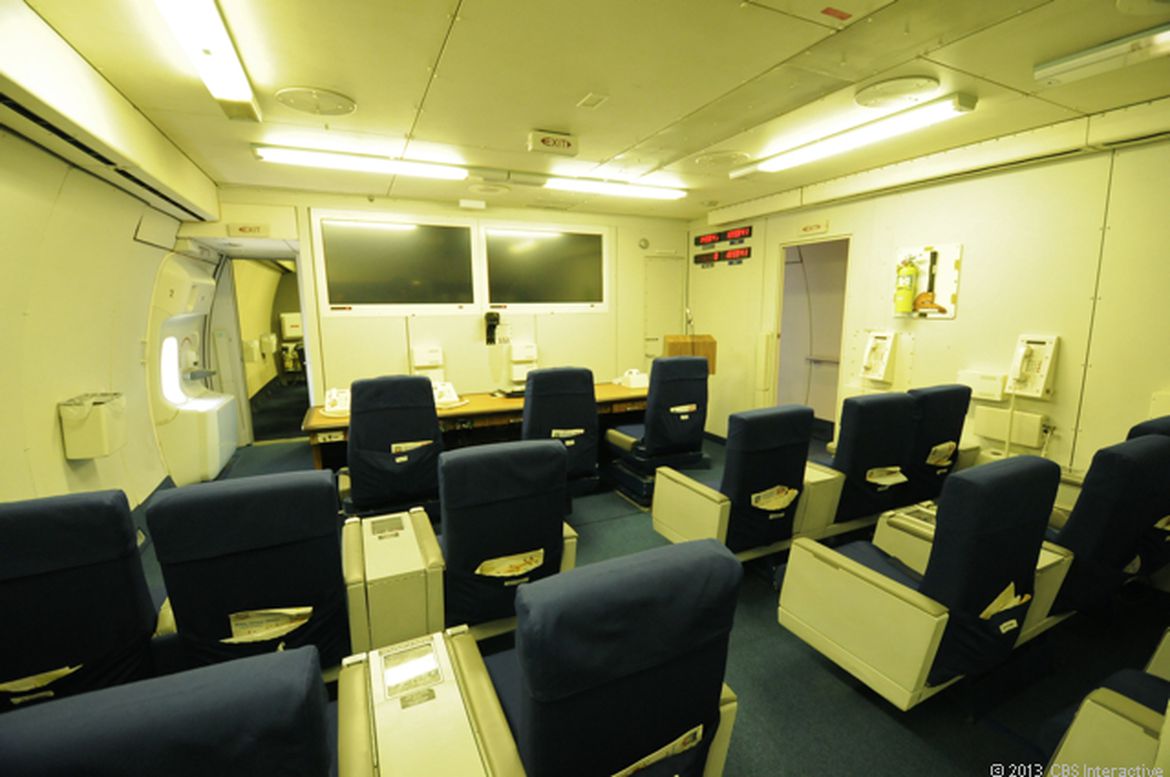 Because the plane sometimes carries the secretary of defense or other senior military leaders, it has a briefing room for traveling press. 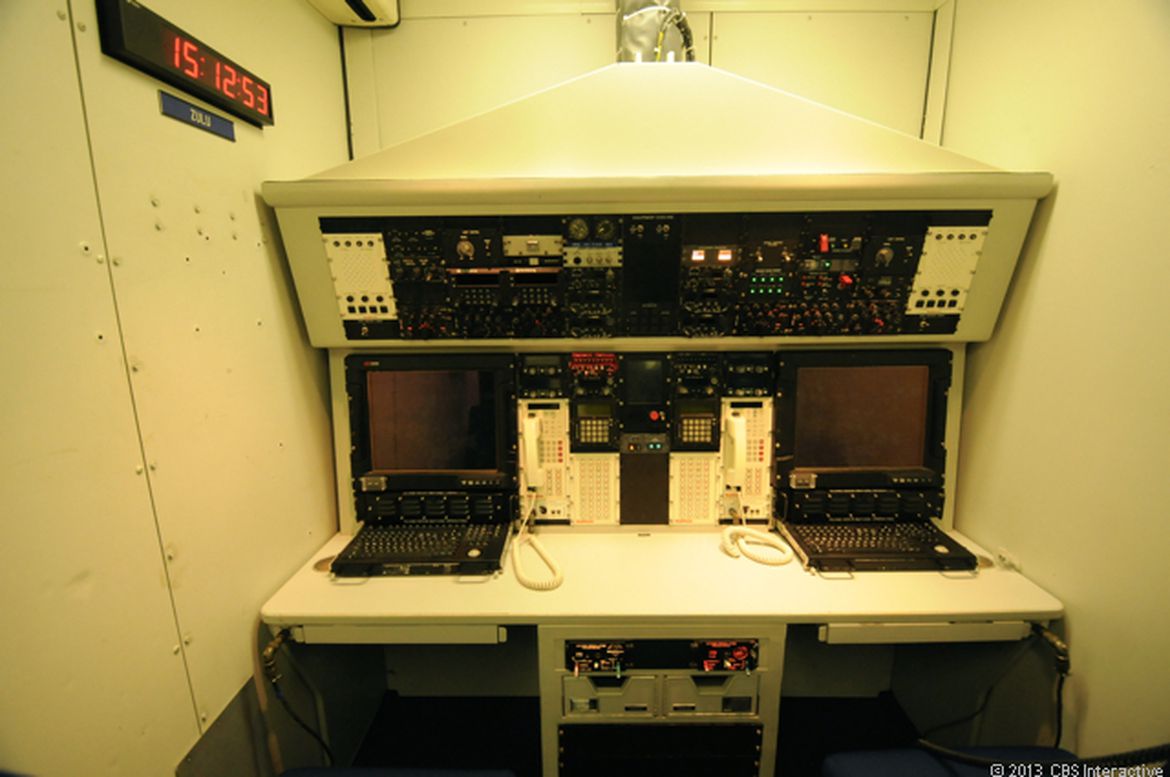 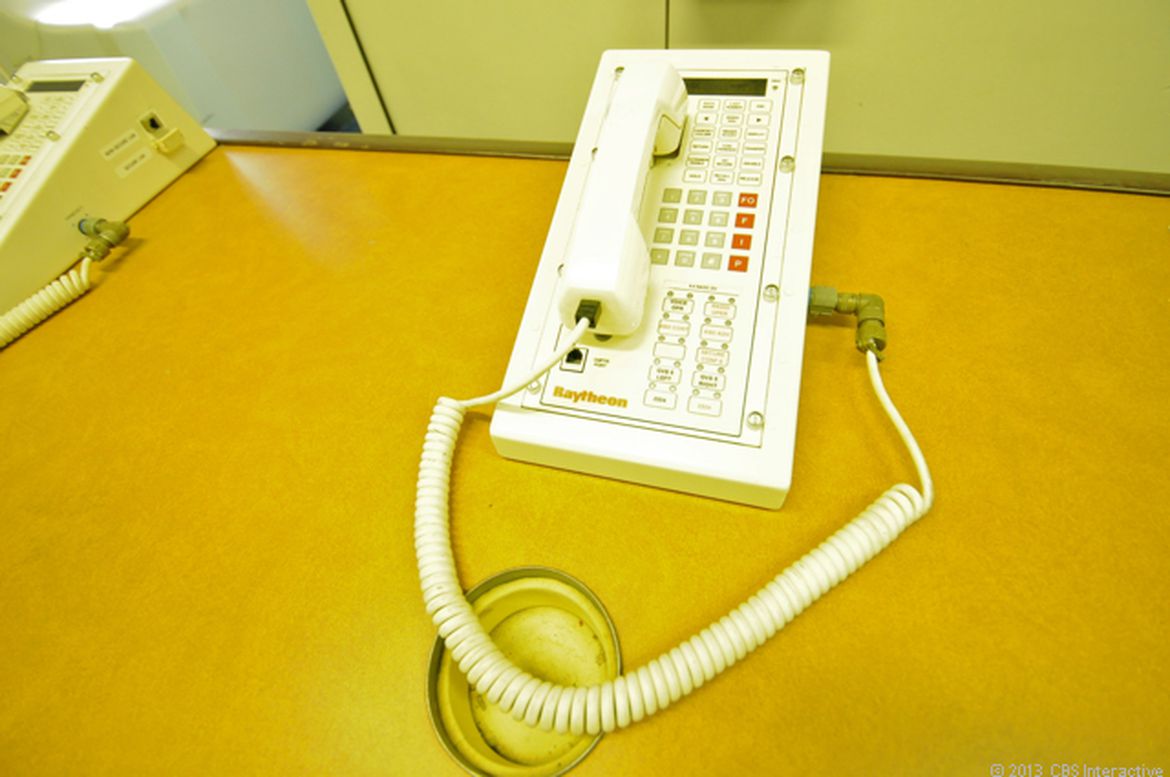 The planes have many phones like this one, although at least one of the planes is having its phones upgraded. 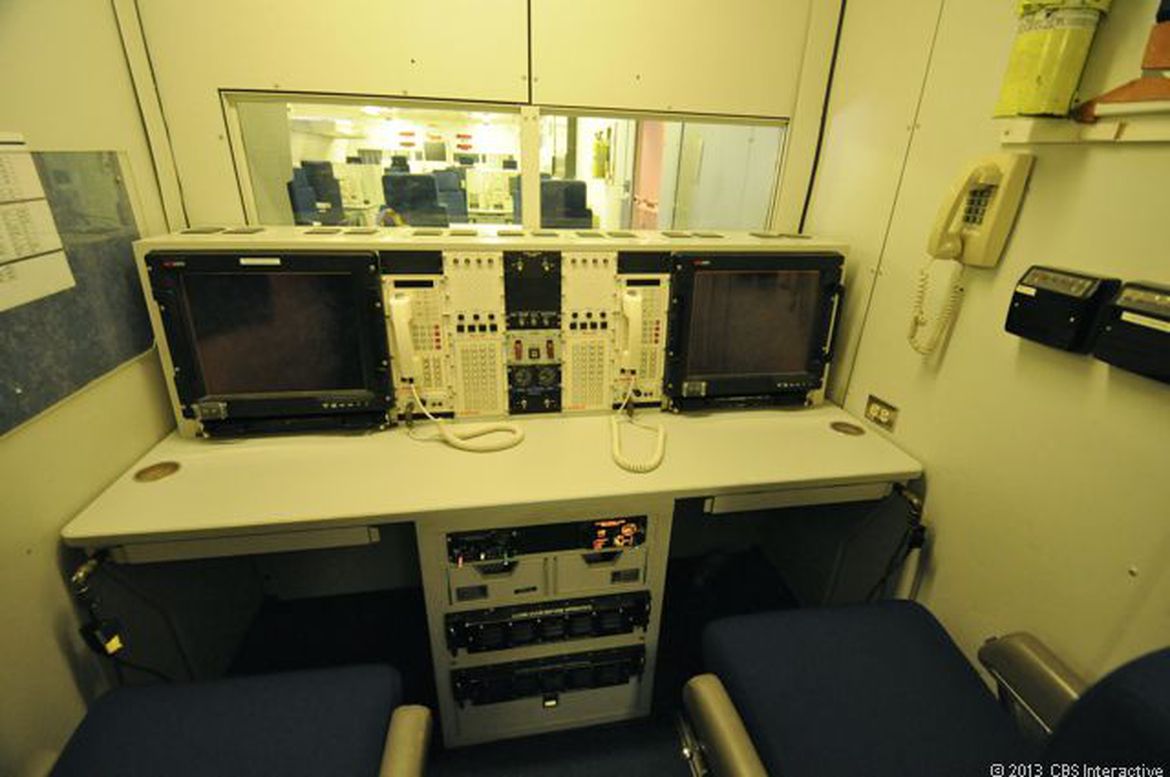 This is the other side of the radio compartment. It handles non-secure communications from the ground or other aircraft.

In the plane’s technical room, one console is dedicated to handling the plane’s on-board power and cooling functions. 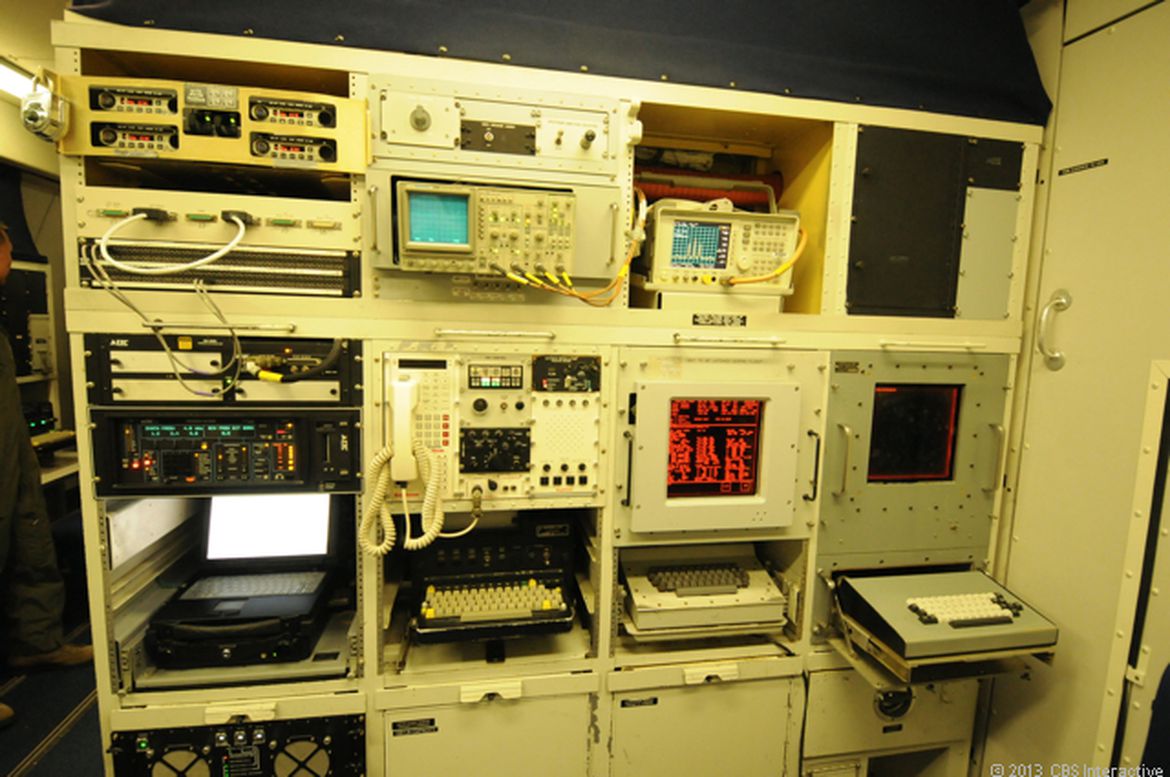 Also in the technical room, this console is dedicated to routing communications that come in through satellite to the appropriate phone or radio on board the plane.

This console is dedicated to routing air-to-ground line communications. 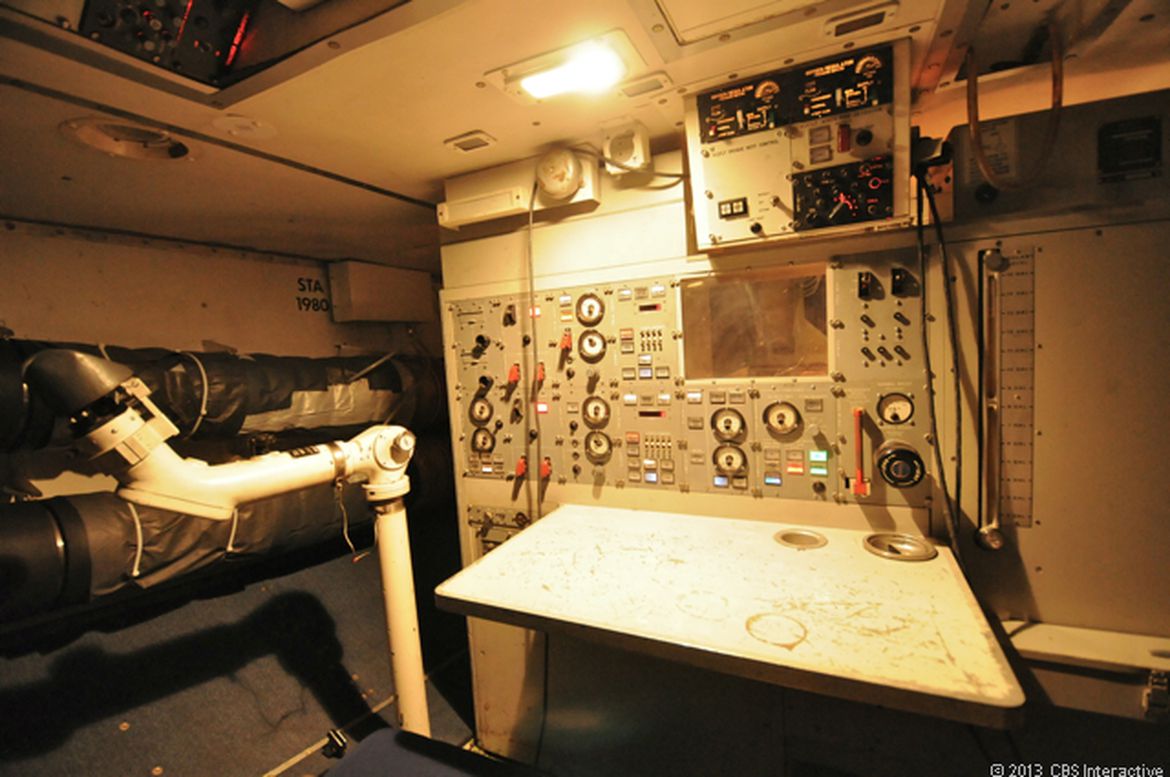 Among the plane’s many communications tools is a very-low frequency antenna that can be trailed out the back of the aircraft. Depending on need, the antenna can be as much as five miles long. Technicians can monitor the antenna from this station, and see it physically through the white periscope that is on the left side of the station. It is vital that the technicians monitor the antenna when it is outside the plane because it is fragile and can be damaged or destroyed in rough weather or turbulence. 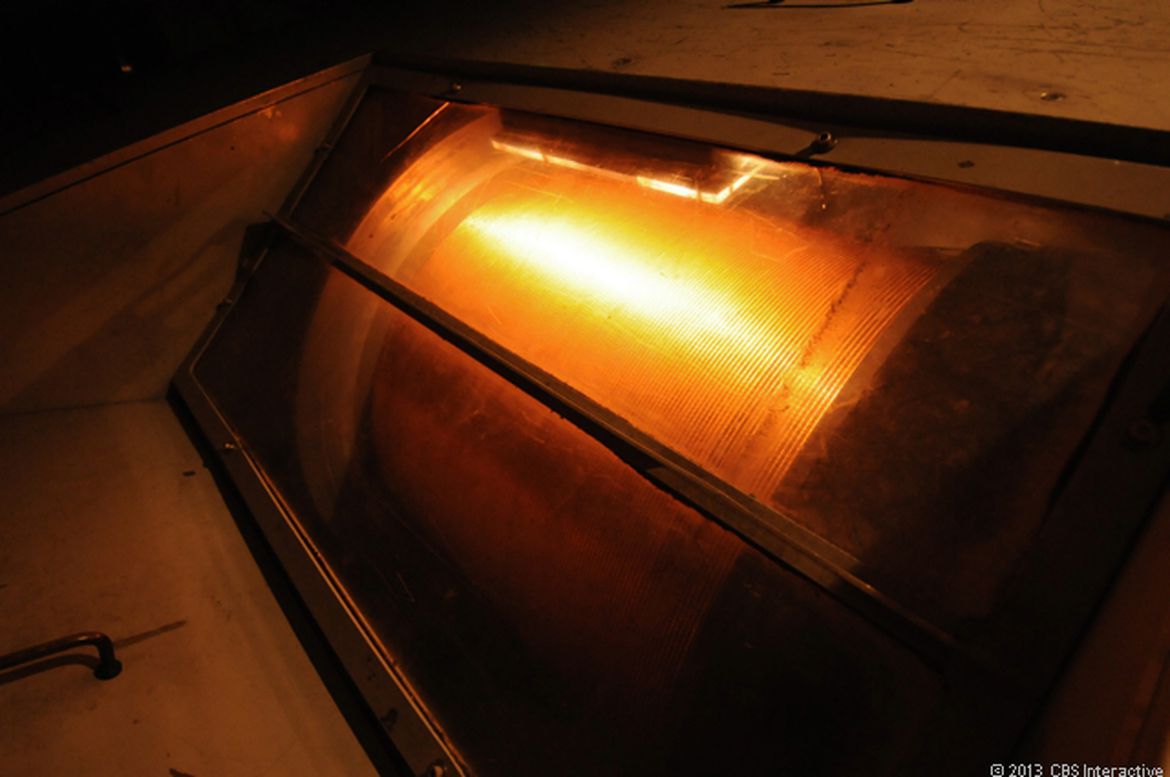 This is the very-low frequency antenna, wound up in a giant spool. 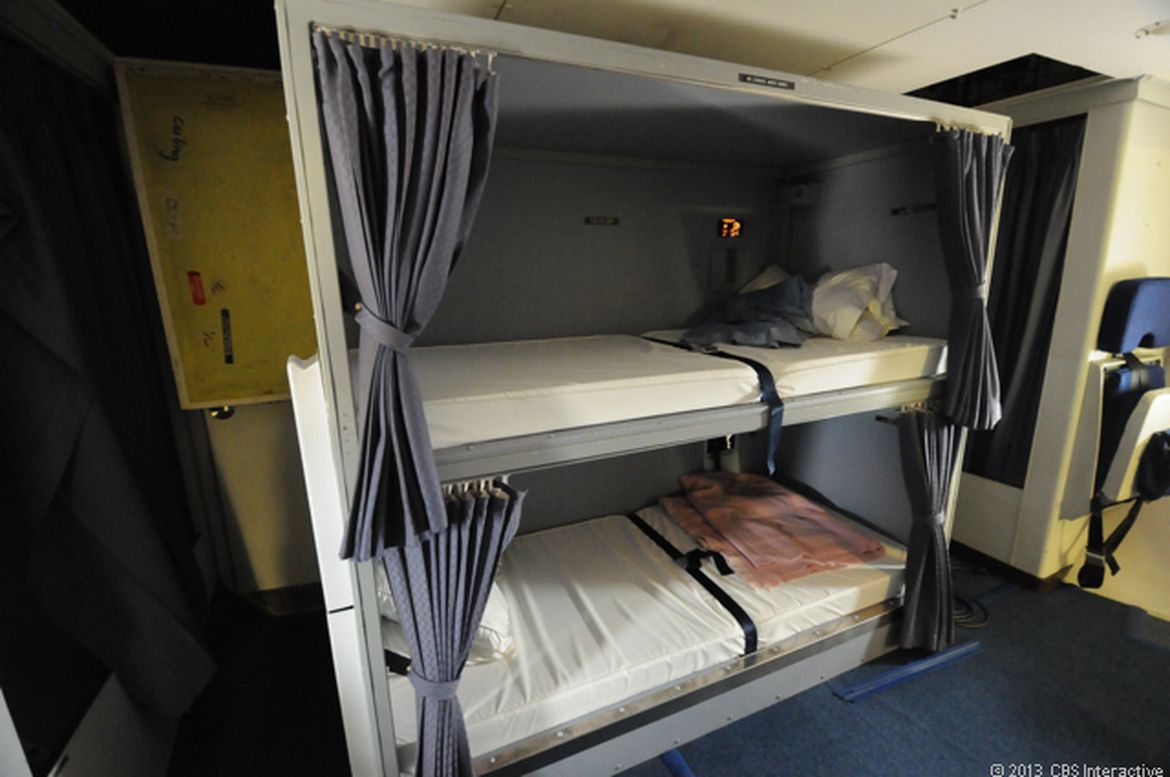 The plane has a number of bunks for crew rest. If necessary, the Doomsday planes can be refueled while aloft, extending their flying time to well more than ten hours. 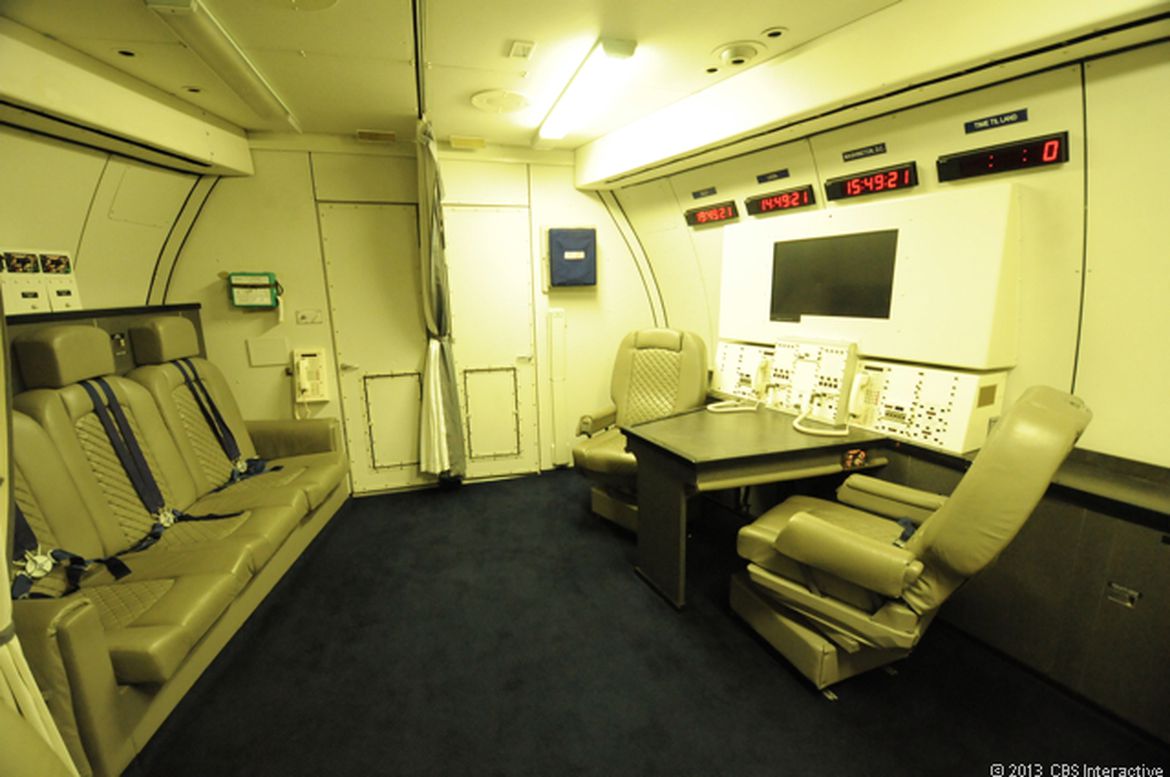 While the NAOC planes are designed to provide airborne command and control functionality in case of a major military crisis, they are also used to fly the Secretary of Defense on international missions. When the Secretary is aboard, this is his dedicated compartment. It includes a bunk, and several chairs, a desk, and video screens.

If the plane is flying without the Secretary aboard, the compartment can be used by other senior officers. 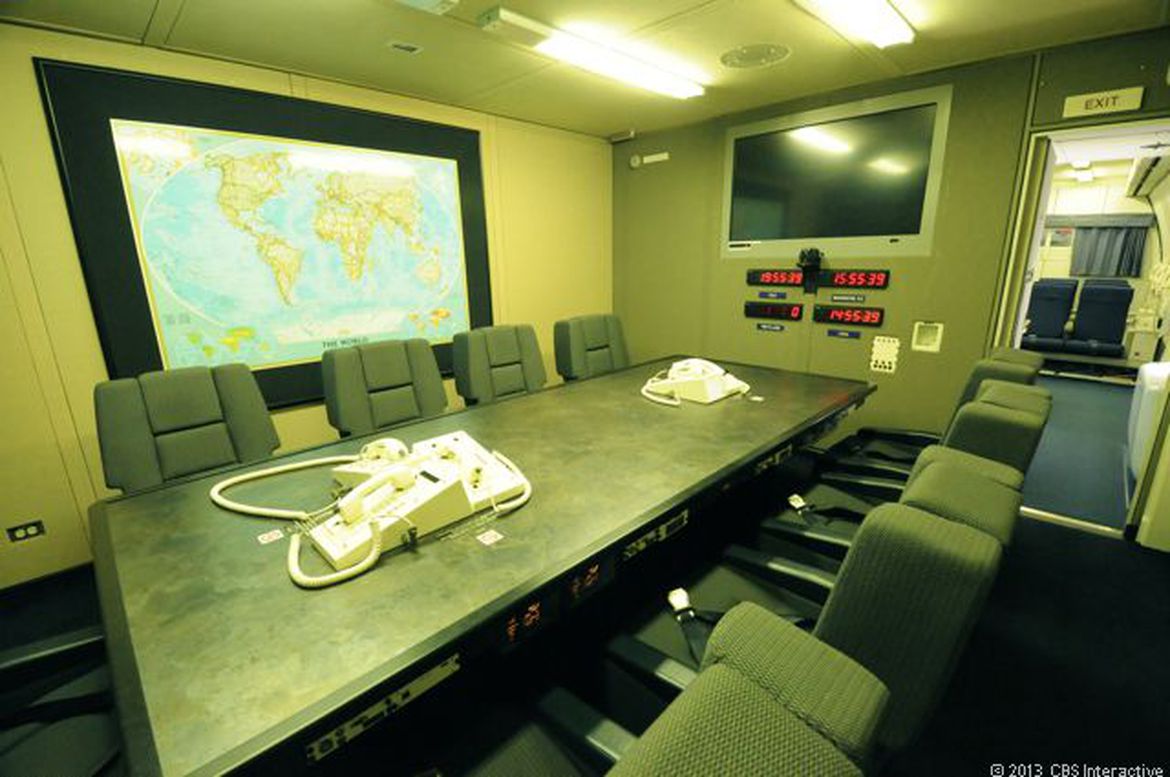 Located just outside the secretary of defense’s quarters, this conference room is set up to facilitate live video conferences, as well as all the other forms of communications the plane provides and enables. When aboard, the secretary will often use the room for long meetings. 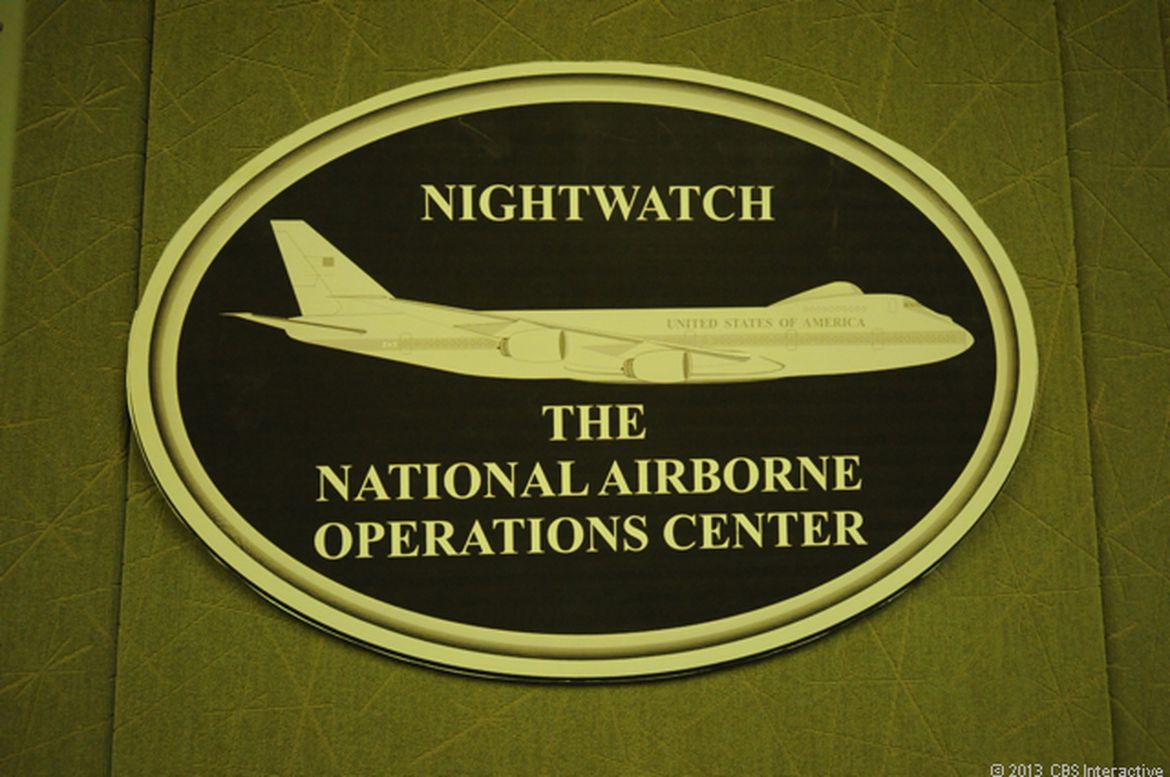 This insignia, depicting the National Airborne Operations Center logo, and the term “Nightwatch” is found on the wall of the conference room. 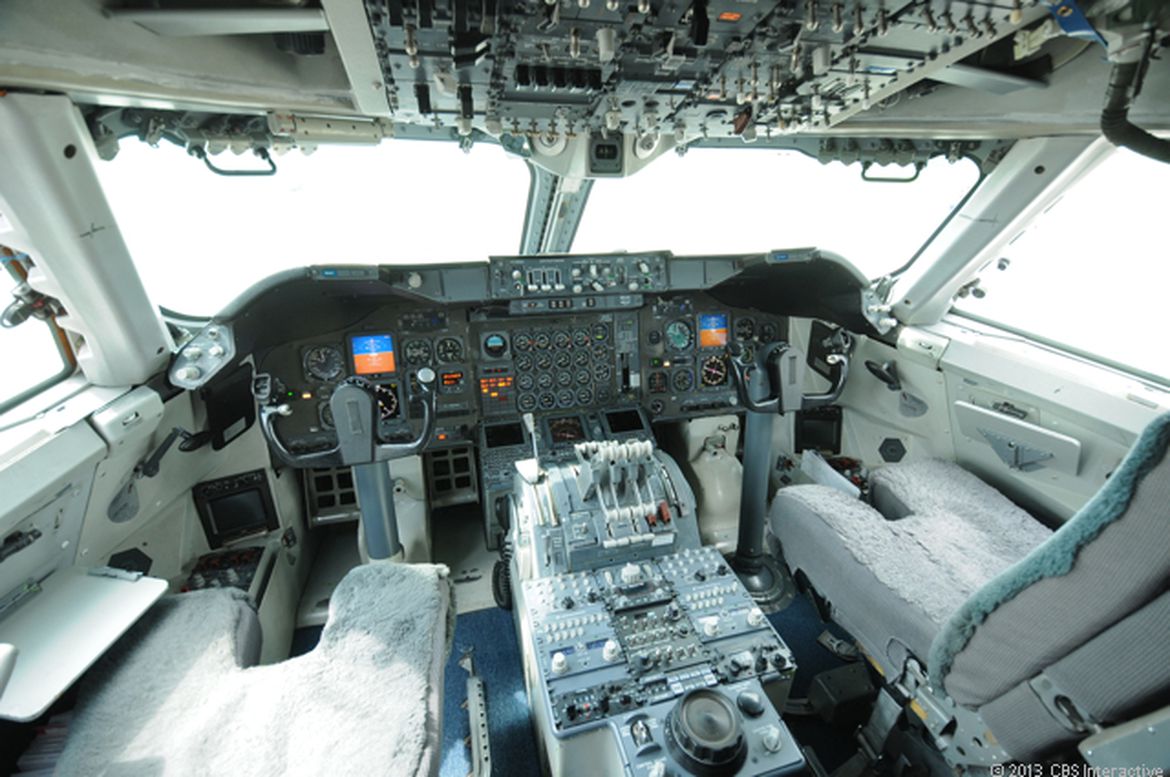 This is the plane’s cockpit. With a few minor differences, it is essentially the same as on any Boeing 747-200. 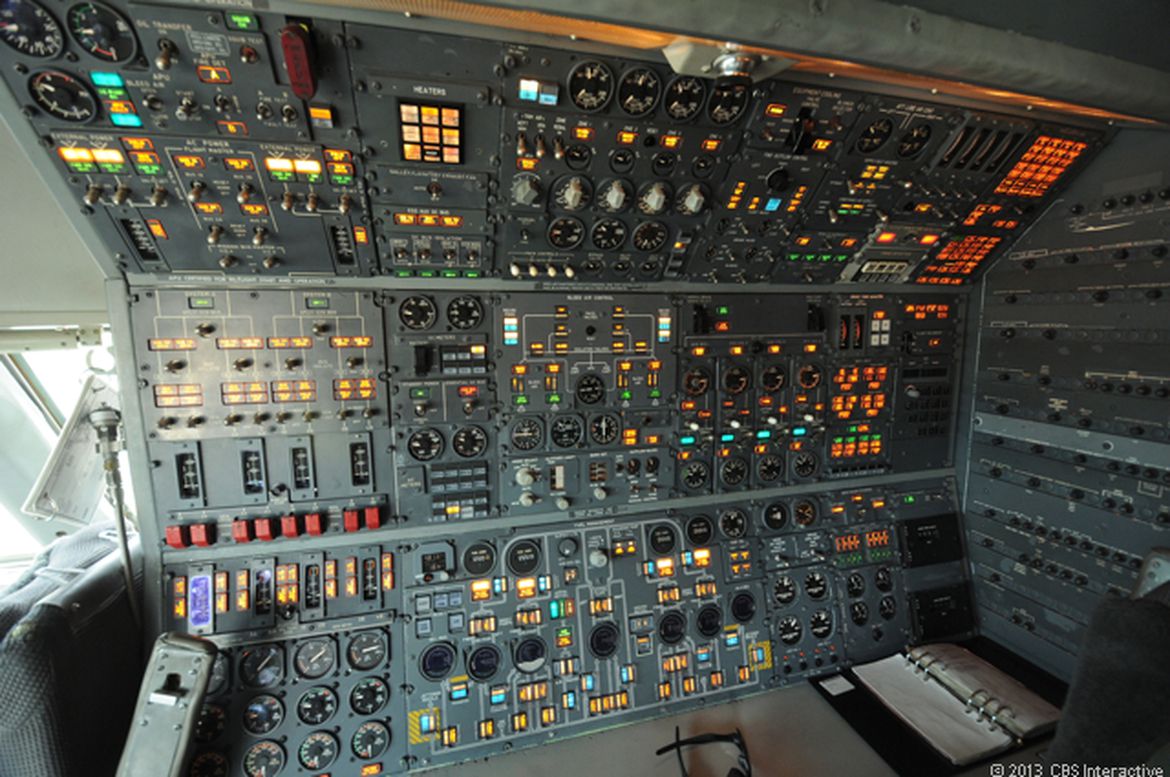 This is the flight engineer’s console. On Boeing 747-400s and 747-8 Intercontinentals, there is no flight engineer, with most of that role’s functions having been automated. Air Force One is also a modified 747-200. 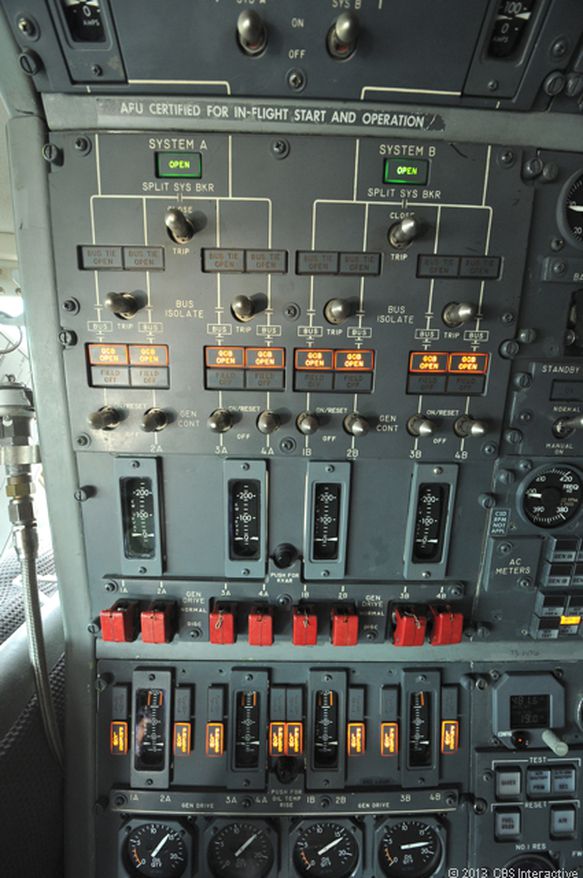 One major difference between the NAOC planes and a standard 747-200 is that the Doomsday aircraft have eight generators, with two for each engine. A normal 747-200 has only one generator per engine. This area of the flight engineer’s console shows the status and provides control over those eight generators.

Alert plane from the cockpit

The NAOC plane that is on alert is seen out the cockpit window of one of the other Doomsday planes.

Located at the rear of the cockpit, this is the navigator’s station. 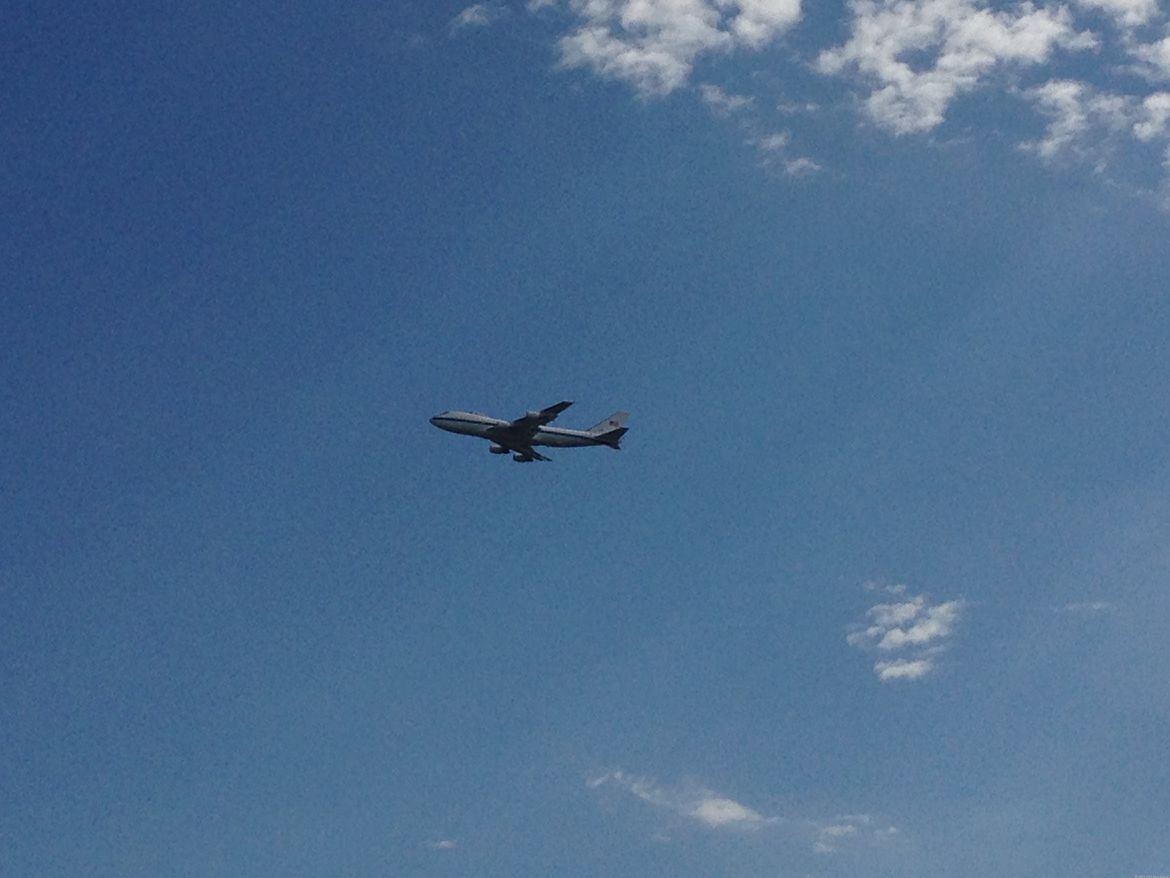 One of the Doomsday planes is seen taking off over Bellevue, Neb., just outside Offutt Air Force Base. Though designed to provide full command and control functionality during the most serious of military crises, the planes are frequently flown on training and other missions.