Teenager, 19, One Of Youngest Ever Airline Pilots

Luke Elsworth has become one of the youngest airline pilots ever in the UK (Picture: PA)

A teenager has become one of the UK’s youngest ever airline pilots. Luke Elsworth, 19, was offered a job with easyJet after taking one of the fastest possible routes to becoming qualified.

He enrolled in the airline’s pilot training program at CTC Aviation in Southampton almost as soon as they would accept him – just nine days after turning 18. 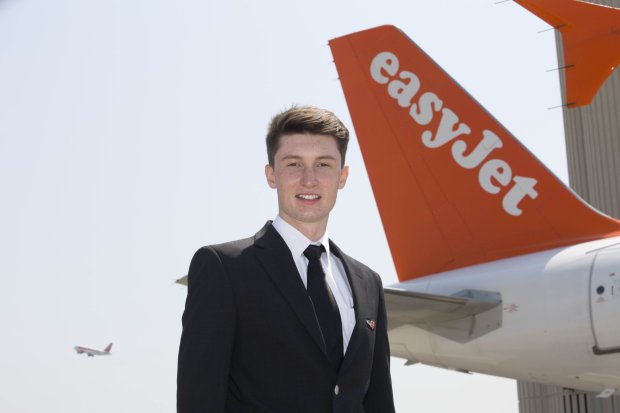 Mr Elsworth completed the course – which included six months on simulators and a stint flying light aircraft in Arizona, USA – in 18 months and he was appointed as a first officer for easyJet in April.

He holds a Multi-Crew Pilot Licence and is the youngest airline pilot in the UK, according to Civil Aviation Authority records.

Asked whether he felt it was appropriate for someone of his age to fly passenger jets, Mr Elsworth replied: ‘I don’t see why not. I really want to encourage more younger people to get into it.

‘If you’re good enough to be there, you’ve done the training and you’re suited towards it then I don’t think age really has an impact.’

He insisted he has not noticed any worried looks from passengers when they see him enter the cockpit.

‘I’ve not had anything. If there was a train driver that was 18 and he’d been through all the training I’d have complete trust in him. I wouldn’t bat an eyelid.’

When questioned if he would be able to cope with a mid-air emergency, Mr Elsworth said: “I would hope I would… There’s no reason why I shouldn’t be. I’m comfortable flying the aircraft.”

Former British Airways pilot Eric Moody said he believes the age of a pilot ‘has got very little to do with it’.

He went on: ‘Best of luck to the young lad, I hope he has a long and successful career. It’s all down to competence. If he’s good then it’s okay.’

Mr Elsworth, who grew up near Warrington, Cheshire and is now based at London Gatwick, was adamant that despite his father, Paul, being an easyJet captain, he was never pressured to join the profession.

‘I’d seen what it was like,’ he said. ‘It was obviously something that was very exciting. It was always my choice.’

He described his first flight – from Gatwick to Toulouse in the south of France – as ‘incredible’, adding that he felt ‘relaxed and comfortable in the environment’.

Pilots enjoy great views every day because ‘it’s always sunny above the clouds’, he added. Mr Elsworth flies Airbus A319 and A320 planes and said every time he steps off an aircraft he turns around and feels excited to see the ‘massive piece of machinery that you’ve just landed’.

The 19-year-old insisted that he had no regrets about embarking on a career with heavy responsibilities at such a young age.

‘Maybe I sacrificed going to university,’ he said. ‘On your days off you might not be going to the pub and drinking loads, but you can still go out and have fun.

‘It’s not as if you’re constrained to being inside all day revising. You do get the opportunity to relax. I don’t feel like I’m missing out.’

He passed his driving test just days after turning 17 and claimed he would have embarked on the pilot training course even earlier if he was allowed.

His next step is to become a captain – although despite his rapid progression that does not normally happen for at least eight years.

airlineaviationboybreakingellsworthfliesflyingglidersloungelukeluke elsworthnewsplaneplanessailplanes
Prev post How does the control joystick in Airbus aircraft work?
Next post Antonov An-2, The Plane That Can Fly Backwards!

117 thoughts on “Teenager, 19, One Of Youngest Ever Airline Pilots”